By the end of June 1944, Anglo-Canadians were planning to seize the municipality of Vieux and the hill 112 on the northern edge of the village. Indeed, the height of Hill 112 becomes one of the objectives of the 43rd “Wessex” Infantry Division in the framework of the Epsom operation, launched on 26 June 1944. But the German resistance prevents any rapid and Hill 112 remains under their control until June 29, when the Fourth Battalion (159th Infantry Brigade, 11th Armored Division) is able to capture it. But the next day, June 30, the Germans counter-attacked and pushed back the English to the commune of Baron-sur-Odon.

On July 15, 1944, a Typhoon IB fighter-bomber, piloted by New Zealand Warrant Officer Douglas Leopold Burke, was shot by the Germans and crashed on the lands of the commune. Native from Matamata, New Zealand, he was 20 years old and belonged to 247 Squadron, 124 Wing, No 83 Group of the RAF 2nd Tactical Air Force. His body rests in the military cemetery of Banneville-la-Campagne.

After the liberation of Caen, the Anglo-Canadians now want to reach these heights in the southwest of the city that dominate the plain of Caen. Beginning July 24, 1944, they launched Operation Spring, which put pressure on the Germans to the south-east of the capital of Calvados; Their units in the region of Hill 112 and to the west of the Orne river are weakened because they risk being isolated in the event of an adverse breakthrough. The British of the 43rd Wessex Infantry Division, commanded by Major General Ivor Thomas, took advantage and continued their offensive actions and the Germans gradually retreated as of August 4th, abandoning Hill 112 to their opponents. The English captured the town of Vieux on the same day. 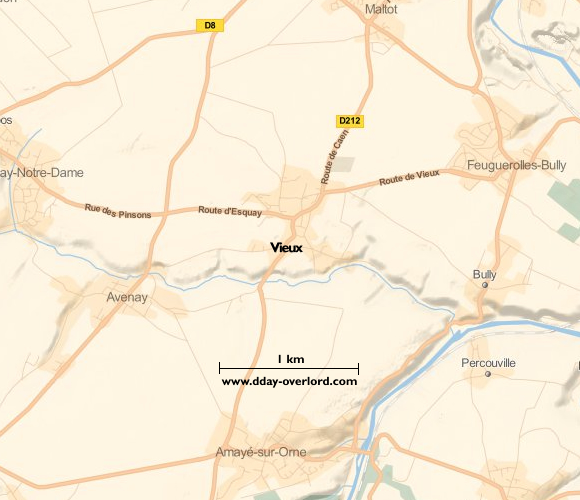