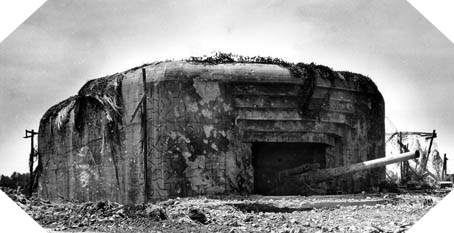 The Crisbecq battery and one of its casemates protecting a 210 mm gun.
Photo: US National Archives

The Crisbecq battery is located in the Cotentin near the hamlet of Crisbecq, at a height 2,800 meters from the shore. It is the most powerful battery of the German defenses in the area of the landing beaches. It is also known as the battery of Saint-Marcouf.

Construction and composition of the Crisbecq battery

Its construction began in 1942 under the control of the Todt organization in charge of the installation of the installations of the Atlantic Wall. Originally composed of six 155 mm pieces which are then moved near Fontenay-sur-Mer, the Germans wish to install four casemates of the Regelbau R683 type, each protecting a 210 mm gun (Skoda K39/40 from a range of more than 30 kilometers), whose shots are controlled by a management position.

In the spring of 1944, only two R683 casemates were completed and operational (even if the mobile shields to equip the guns were not yet in place) and three guns of only 210 mm are present: the allied bombardments which have accelerated since the month April of the same year prevent the continuity of the works. On June 5, 1944, a third casemate was still under construction, while work on the fourth had not even begun. The Regelbau R683 types prove to be difficult and expensive constructions, each requiring almost 100 tons of steel and 2,000 cubic meters of concrete. A 105 mm gun reinforces the general system.

In addition, the site of the Crisbecq battery includes for its anti-aircraft defense six guns of 75 mm of French origin and three guns of 20 mm. The protection of the surrounding area of ​​the battery is achieved by the installation of 70 machine guns, put into battery both in tobrouks and on simple shooting stations. A barbed wire wall and minefields encircle the site, which includes a large number of trenches, troop shelters and ammunition bunkers. The position of coastal artillery also integrates the observation post of the Azeville battery, about two kilometers apart.

In June 1944, the garrison of the Crisbecq battery was made up of 320 soldiers under the orders of the Oberleutnant Zur See (navy rank for lieutenant) Walter Ohmsen.

The Crisbecq battery during D-Day

Like the other German batteries along the Normandy coasts, Crisbecq was bombarded extensively by the Allied air force on the night of 5-6 June 1944. 598 tons of bombs were dropped: dozens of German soldiers were killed during this attack and all the anti-aircraft guns as well as one of the 210 mm pieces are destroyed.

In the early hours of D-Day, American paratroopers belonging to the 502nd Parachute Infantry Regiment of the 101st Airborne Division stormed the Crisbecq site. These soldiers, parachuted far beyond their zone of jump in the region of Saint-Martin-de-Varreville, tried everything for the whole but collide with the solid German defense: twenty of them are taken prisoners.

At dawn on June 6th, at 5:55 am, Crisbecq’s battery opened fire on the allied armada present off Utah Beach, one of the two American sectors. At the same time, an allied aircraft charged with scattering a screen of smoke to protect the warships around the islands of Saint-Marcouf, in front of Crisbecq, is shot down by the anti-aircraft defense. The Crisbecq artillerymen, with a good visual on the destroyer, then target the USS Corry. At the exact moment of the landing on Utah, at 6.33 am, shells directly reached this American destroyer beneath the surface of the water at the keel and began to sink.

The two German batteries of Crisbecq and Azeville concentrated their shots on the destroyer in perdition. One of these shells hit the 40 mm gun barrel and exploded nearby ammunition. At 6:40 am the ship’s commander, George Dewey Hoffman, gave the evacuation order.

Around eight o’clock, one of the last two 210 mm pieces was put out of action by the USS Arkansas, USS Nevada and USS Texas ships. At nine o’clock, a direct shot destroyed the remaining gun. Immediately after these actions, the German artillerymen assess the damage to the parts and, if possible, undertake repairs. One of them was rehabilitated on 8 June, but the allied warships damaged it at once.

From June 6 to 11, German soldiers barricaded themselves on the battery site and underwent several attacks by elements of the US 4th Infantry Division that landed on D-Day in Utah Beach. Walter Ohmsen, reinforced by artillery observers and soldiers of the 919 Infantry Regiment, fiercely defends his battery and even asks the 105-mm guns of Azeville to shoot at his own position when the American assaults reach the heart Of its provisions. He finally gets the order to break the contact and leave his position which is encircled by his opponents.

On the night of June 11-12, 1944, he left the battery without being detected and managed to rejoin the German lines further north with 78 soldiers. 21 wounded are left in the battery, taken care of by a volunteer nurse. It was the Americans of the 39th regiment of the 9th Infantry Division who captured the Crisbecq battery without fighting. A few days later, Ohmsen is decorated with the Iron Cross for his resistance of virtually a week against American military power.

During the weeks following the conquest of the Crisbecq battery, the American military engineer tested the resistance of the German casemates, using large quantities of explosives, the effects of which caused more damage than the bombing.