This letter was written by General Eisenhower the day before D-Day on the assumption that he was to announce to the world that the landing had ended in failure. He indicates that he takes full responsibility for this attack. Immediately after the success of Operation Overlord, he crumples the document and puts it in his trash: his military secretary retrieves it and keeps it, allowing us today to have access to it.

It should be noted that this draft is dated July 5th. In 1966, when the question about this date was put to him, he indicated that it was a minor mistake on his part and that he had written it on June 5, 1944. 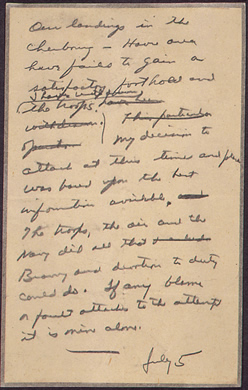 ‘Our landings in the Cherbourg-Havre area have failed to gain a satisfactory foothold and I have withdrawn the troops. My decision to attack at this time and place was based on the best information available. The troops, the air and the Navy did all that bravery and devotion to duty could do. If any blame or fault attaches to the attempt it is mine alone.

Back to the D-Day files menu