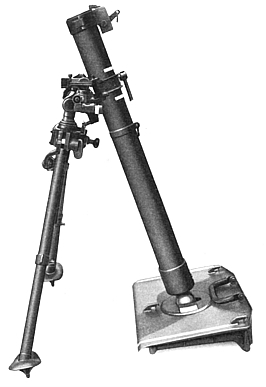 Designed by Rheinmetall in 1932 to increase the firepower of the German infantry with new 8,1 cm mortars, the 8 cm Granatwerfer 34 entered service in 1934. 117 kg of raw materials are needed for its production and the unit price of this mortar comes to 810 Reichsmarck.

Precise and simple to use, it comes in three transportable loads on the back of a man: a base plate all-round, a bipod and a tube with smooth core. Two versions of the Granatwerfer 34 are also developed: a short version (Kurzer 8 cm Granatwerfer 42) and an embedded version (GrW 34/1) for equipping vehicles or defensive positions such as tobrouks, which is the case along of the Atlantic Wall and particularly in Normandy.

The GrW 34 is capable of firing explosive shells and smoke bombs up to one kilometer. The maximum firing distance can be up to 2,400 meters with the addition of propellant charges at the tail fin (three maximum).