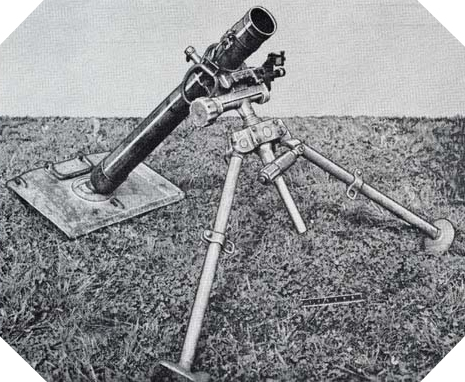 The Americans modernized their army before the beginning of the Second World War and sought in particular to reinforce the firepower of the infantry which gradually acquires light mortars. The French models, developed by the engineer Edgar Brandt and which are world references in 1939, are very influential in American development studies.

The United States began production of the 81 mm M1 mortar, which is supplied in three transportable man-made bundles: a 20 kg all-round base plate, a bipod (21 kg) and a smooth core tube (20 kg).

The M1 81 mm Mortar can fire several types of shells to obtain three different effects: destruction with explosive and incendiary shells, blindness with smoke bombs and illumination with illuminating shells. It is used throughout the duration of the Second World War is especially during the Battle of Normandy.

It was replaced in 1952 by the M29 mortar, lighter and with a greater range.