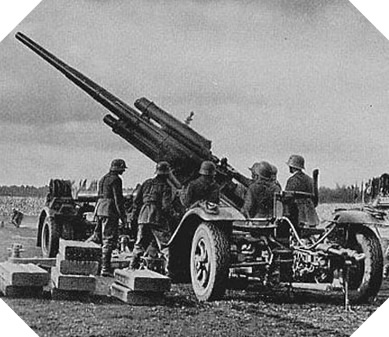 This cannon, invented in 1930, was built by the factories of the German brand Krupp and was delivered in the course of 1933. Improved production was used from 1936.

It is to be used for the German anti-aircraft artillery, the Flak, and thus takes the name: 8.8 cm Flak 18. Its main advantage over other guns lies in its high rate of fire. Thus, it is used on the eastern front from 1941 as an anti-tank part.

The 88 mm cannon is also used for Tiger tanks, whose formidable effectiveness has been proved on the various battlefields, since the enemy tanks, notably the British Churchill and the American Sherman, have only a 75 mm gun . The German firepower is clearly superior to that of the Allies.

During the Battle of Normandy, the 88 mm gun is one of the most used artillery pieces by the Germans and the most feared by the Allies, who tend to see it everywhere. Its range is three to four times larger than the opposing guns and its ability to pierce shielding remains the same despite the distance.

A final version of the 88 mm gun is produced at the end of the Second World War, called 88 mm Flak 41. It is capable of firing twenty projectiles per minute.

Many 88 mm guns are found near the beaches or in Atlantic Wall casemates during the Normandy landing and are often considered priority targets by the Allies.

It is one of the most well known and most effective artillery pieces of the entire Second World War.