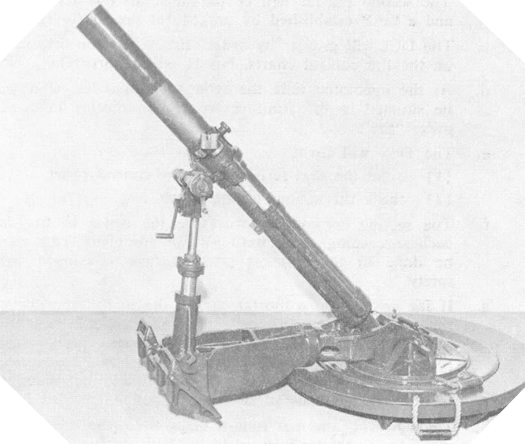 Before the Second World War, the Americans renovated their aging M1 4.2-inch (107 mm) mortar, which entered service in 1928 and developed from the 4-inch (102 mm) Mk I English mortar. The new model, of unchanged caliber and christened M2, sees its reinforced structure and can fire new shells capable of reaching the 4 kilometers of range with the addition of propelling charges on the empennage.

The M2 mortar of 107 mm is used for the first time in Sicily where nearly 35,000 shells are fired from July to August 1943. It is then used during the Battle of Normandy where it provides valuable support for the benefit of the American infantry .

After the Second World War, it was used during the Korean War before being gradually replaced by the M30 heavy mortar from 1951. The 4.2-inch M2 remained in service in the US Army until 1953. It enters In other armies in Austria, Bolivia, Brazil, Cambodia, Ethiopia, Greece, Guatemala, Japan, Laos, Tunisia and Paraguay.