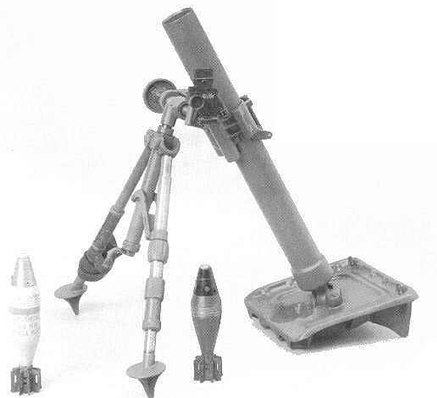 The introduction of the 81 mm M1 mortar into the American infantry immediately raises the problem of weight. With its 61 kg, it does not allow to equip the sections of aerobatics which need to retain their freedom of action and their agility. The Americans want to develop a lighter mortar in order to arm all the infantry units as well as the airborne troops.

This is how the M2 60 mm mortar, with its 19 kg, makes the third of the weight of the model M1. The M2 is largely inspired by the work of the French engineer Edgar Brandt whose creations revolutionize the artillery of that period.

Equipped with a high rate of fire, this mortar is effective and provides an additional extension to combat sections compared to its conventional firepower. It was used throughout the Second World War and especially during the Battle of Normandy, equipping American airborne units parachuted on the night of June 5-6, 1944.

It remained in the US Army after the Second World War: engaged during the Korean War and the Vietnam War, it was eventually replaced by the 60 mm model M224 mortar from 1978 onwards.