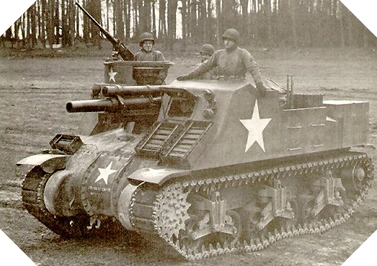 Before the beginning of the US entry into the war, the American army wants to have a more efficient mobile artillery. The engineers reuse the M3 Lee/Grant chassis and modify the upper structure of the armored vehicle by opening a space capable of incorporating a 105 mm Howitzer M2A1 L / 22.5 gun.

The M7 self-propelled gun is equipped, for its close protection, with a small turret located on the front right of the machine that can receive a machine gun of 12.7 mm caliber. The shape of this turret is reminiscent of the pulpits of the churches, where the priests pronounce their sermon, so the M7 is very quickly called “Priest” which means “priest” in English.

The British are the first to use the M7 Priest in battle on the battlefields of North Africa and in particular at El Alamein. The M7 Priest was used by the Allied military as a self-propelled gun of good quality and resistance. It was used throughout the Second World War but also during the Korean War under the denomination “M7B2”.

Although it is very resistant, the M7 self-propelled gun can only with difficulty climb important differences due to its large mass.