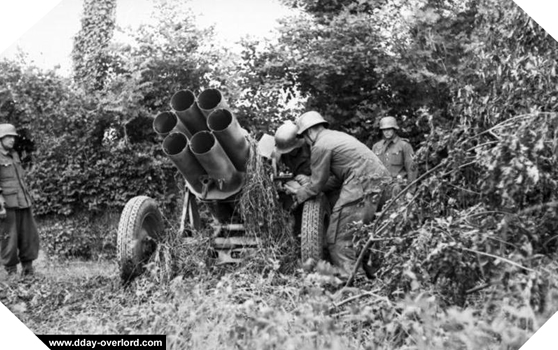 Upon entering the war, Germany developed a multiple tripod mounted, easily transportable rocket launcher called the Nebelwerfer, meaning “fog launcher”. The Germans were inspired by the principle of operation of the Russian launcher Katioucha to develop the Nebelwerfer and it can be used directly by the infantry.

Used on the Russian front, they are also used by the Germans throughout the battle of Normandy. The Allies manage to recognize the characteristic sound of firing and the deafening whistling of rockets in the air, which plays a psychological role that is not negligible. By collecting the Nebelwerfer, the Germans manage to saturate the ground of a hundred rockets in just a few seconds.

Several models are created, such as the 41 and the 42, which have five or six tubes according to the caliber used.