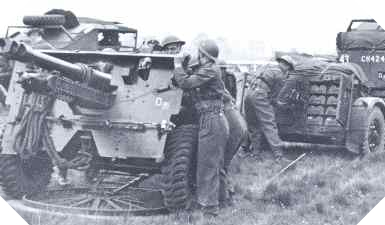 The QF 25-Pounder gun (international caliber: 87.5 mm) was developed in the interwar period by British military engineers to replace the aging QF 18 Pounder (84 mm) and 4.5 inch 114 mm) dating from the Great War.

The cannon, which is placed on a circular steel structure that allows it to pivot rapidly in all directions, appears during the Second World War as one of the best pieces of field artillery in the entire war.

Its main strengths are its relatively high firing rate, the perforating performance of its shells and its great mobility. Widely used during the Battle of Normandy, this 25-pound Mk II gun offers an important support to the Allied troops sowing terror within the German units.

This gun was used as a main piece of British artillery until the 1950s, and remained in service until 1967 on English military training grounds.