History of the Junkers Ju 87 Stuka – Battle of Normandy 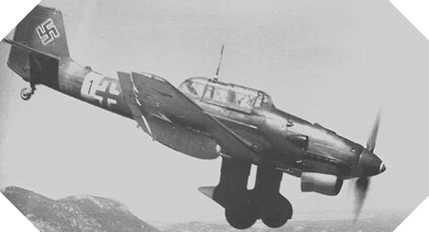 The Stuka (abbreviation of Sturtzkampfflugzeug, meaning “dive bomber” in German) is one of the most famous German aircraft of the Second World War. More than 5,700 units are built.

It was in 1935 that the first model Ju 87 manufactured by the firm Junkers took off. This light bomber of attack on the ground immediately appears as an excellent apparatus, especially since it is very strongly armed. Tested during the Spanish Civil War, the Stuka took part in the Battle of Britain in 1940, during which time it presented itself as a vulnerable apparatus if it was not escorted by lighter fighters.

Used from 1942 on the eastern front, where he carried out anti-tank bombing missions, the Junkers Ju 87 participated in small offensives during the Battle of Normandy in the summer of 1944.

The Stuka is equipped with a siren that sounds when the device stings towards its target. This bomber also presents itself as a psychological weapon, both for the military and for the civilian populations.