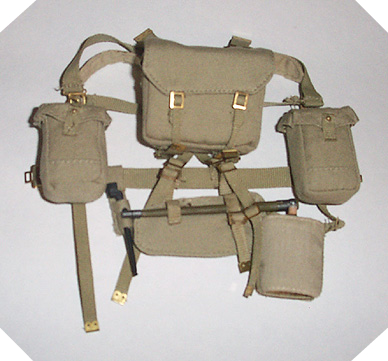 With the introduction of new armaments and equipment into the British infantry before the Second World War, infantrymen made the request in 1937 to receive a new one-person carry key to replace the 1908 and 1925 models.

On June 8, 1938, a new brace carrier began to be produced and was delivered to the regiments the following year. It is made of waterproof cotton and dyed in khaki by the Army of Earth and in blue-gray for the Royal Air Force.

The pockets hold containers for all weapons in the British Army, a gourd and grenades. 37 Webbing not only equips British troops, but also Canadian soldiers and commandos (including the Free France Kieffer commando) during the Normandy landing.

Replaced by the 1958 model but still worn by the British officer cadets on their parade dress up to the 1990s.