History of the M4 Tractor in 1944: technical sheet and pictures 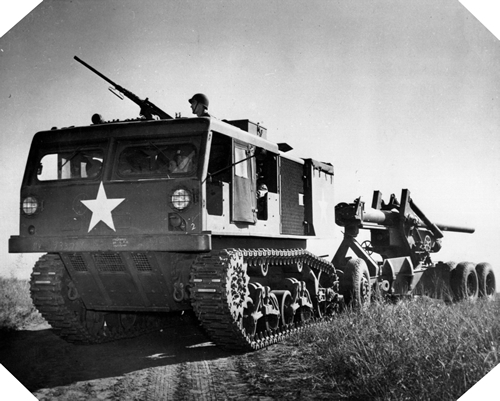 The Great War showed the importance of the mobility of the artillery and the nations equip themselves before the Second World War of vehicles charged to replace the horses to move the pieces on the battlefield.

The Americans were equipped late in an all-terrain vehicle capable of towing the heaviest guns on all the different maneuver spaces and in all weather conditions: the Allis-Chalmers company in 1942 offers a tracked mobility vehicle built From the chassis of the aging M2 light tank.

Engaged in the artillery units from 1943 onwards, it consisted of a large caterpillar cabin, sheltering the crew of the tractor at the front and the servants of the towed artillery ‘To eleven personal), with room for additional equipment. Its crossing capabilities allow it to progress on land movements at thirty percent slope.

Deployed on many fronts and especially in Normandy during Operation Overlord and during the subsequent fighting, the M4 Tractor was used by the US Army until 1960. Several versions were developed like the M4C, The servants compartment accommodates additional ammunition.

The M4 Tractor is also used in other armies after the Second World War like Brazil, Greece or the Netherlands.

A more powerful version, the M6, is also produced by Allis-Chalmers. Motorized by two coupled Waukesha, it allows to tow pieces of artillery up to thirty-eight tons.