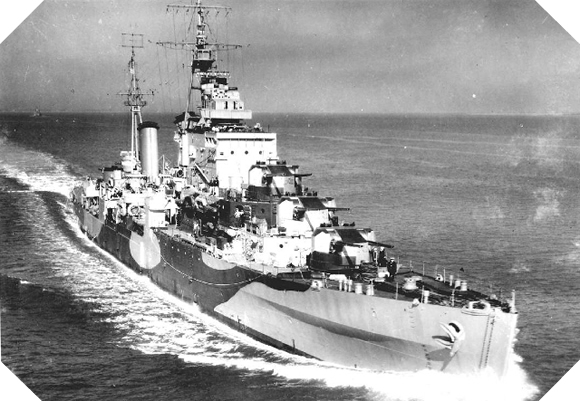 After the First World War, as part of the program to modernize British maritime capabilities, British shipbuilding was commissioned by several light battleships, including those of the Leander class launched in the 1930s. The construction of HMS Argonaut is launched on November 21, 1939.

Originally engaged in the North Sea to transport Norwegian soldiers and weapons to Spitzbergen, the Argonaut participated in convoy escort missions in the Murmansk region. On October 30, 1942, it made its way to the Mediterranean to participate in the invasion of North Africa (Operation Torch) within task force H.

On December 1st, 1942, HMS Argonaut joined with other British warships an enemy naval convoy that destroyed the Italian destroyer Folgore as well as four troop carriers. On December 14, the Argonaut is hit by two torpedoes shot by the Italian submarine Mocenigo: the damage is terrible but “only” three sailors are killed.

Repaired in the United States from April 1943, it is sent in the waters of the English Channel in December of that same year having been attached to the 10th division of cruisers.

Deployed as part of Operation Overlord off the coast of Normandy on the night of June 5-6, 1944, HMS Argonaut is integrated for the occasion at the Bombarding Force K. On D-Day, it receives the mission of destroying the battery of Vaux-sur-Aure and fires a total of 4,359 shells throughout the duration of the battle of Normandy. It suffered only one direct fire from the German artillery without causing any losses.

In August 1944, HMS Argonat returned to the Mediterranean sea to take part in Operation Dragoon (the landing of Provence) and the Aegean Sea in September of the same year where it managed to sink several troop transport ships.

Early November 1944, the Argonaut made its way to the Indian Ocean to carry out numerous escort missions before being integrated in January 1945 with the naval force of the Pacific.

Removed from active service on 6 July 1946 to be placed in reserve, it was finally scrapped as from 19 November 1955.