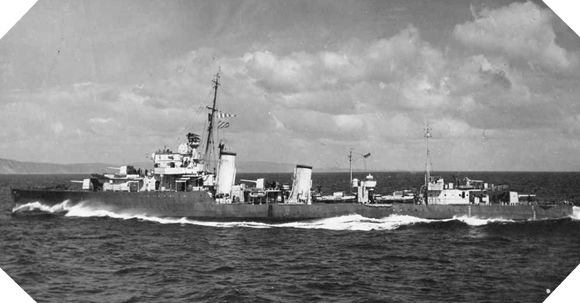 The construction of the HMS Faulknor began on 31 July 1933 and this class F destroyer was launched on 12 June of the following year. It is the third war ship in the history of the Royal Navy to bear this name and the first English destroyer of the class F.

Originally engaged in the service of the Home Fleet which protects the British coasts, it participated in patrols and escorts of convoys across the English Channel, which involved it in the destruction of two German submarines in September 1939 (U-27 And U-39) as well as a third in May 1940 (U-44). HMS Faulknor also participates in the Franco-British landing operations in Narvik, Norway. It joined the H force in June 1940 and took part in the attack on the French naval force of Mers-el-Kebir the following month and participated until August 1941 in various operations off the coast of North Africa.

Beginning in August 1941, it carried out numerous escorts of convoys in the Arctic and across the Atlantic, protecting that of Prime Minister Winston Churchill during his trip to the Atlantic Conference in December 1941. In June 1943, it was deployed in the Mediterranean Sea as part of Operation Husky off Sicily and also participated in Operation Avalanche in front of Salerno. In January 1944, it supported Operation Shingle, the landing at Anzio.

Returning to the English Channel in April 1944, the Faulknor was integrated into Task Force J to participate in the maritime operations of the Normandy landing. On the night of June 5-6, 1944, it made its way in the J1 convoy in the direction of Juno Beach. On D-Day, it opened fire on the German positions west of La Rivière. The next day, the general commanding the 21st Allied Army, Bernard Montgomery, was on board to cross the Channel and visit the troops on the front. On 24 June, the British admirals Cunningham, Willis and Harcourt were also on board, and on the same day it was visited by American admiral Alan Kirk.

From July to September 1944, HMS Faulknor was repaired at Grimsby before resuming its escort missions in the English Channel. On May 8, 1945, it received on board the surrender of the German garrison of the island of Guernsey.