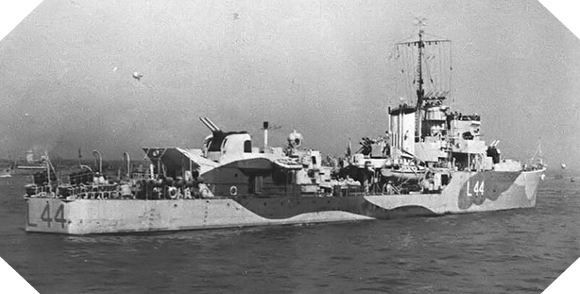 Fully operational in June 1942, it was integrated into the 1st fleet of destroyers operating in the English Channel for the protection of the British coasts. On 13 October, HNoMS Glaisdale intervened against a German maritime convoy off Le Havre before carrying out convoy escort missions to North Africa as part of Operation Torch. After these missions, the destroyer is back in the Channel.

In the spring of 1944, it was integrated into Task Force J for the preparations for Operation Neptune off Normandy and carried out several training exercises. On the night of June 5-6, 1944, HNoMS Glaisdale escorted the J10 convoy to Juno Beach, the Canadian beach. On D-Day, it participated in the bombing of the Nan beach area. The next day, it patrolled east of the armada sector and escorted several convoys.

On 23 June, the destroyer’s engines were seriously damaged by the explosion of an acoustic mine and the Glaisdale was obliged to return to Portsmouth for a general diagnosis: the decision to withdraw it from the service was taken in August. The Royal Navy then took it on its own and it was placed in reserve until the end of the war.

In August 1946, it was sold to Norway, which baptized it Narvik. It served as an escort destroyer before being reclassified as a frigate in 1956 (F 309). It was actively employed until 1962 before being permanently retired from active service and sold to be scrapped.