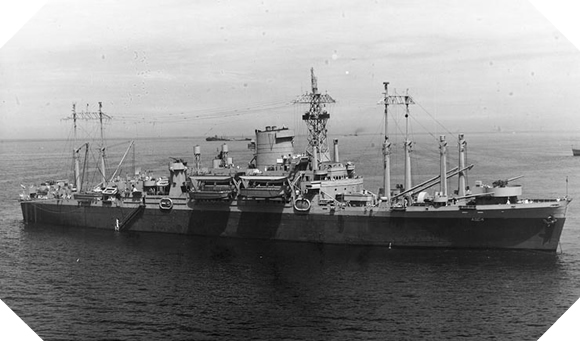 After the Japanese attack at Pearl Harbor, the US Navy requisitioned a number of civilian ships to transform them into warships: in 1942, the Ancon was a civilian ship launched on September 24, 1938. It became the USS Ancon.

Initially used as a troop transport building, it becomes a command building and is deployed in the Mediterranean where it participates in amphibious operations off Sicily and Salerno.

Deployed later in the English Channel to the 11th Amphibious Force in which the USS Ancon served as a flagship, it participated in Operation Neptune and counted in his passengers Admiral Hall (Commander of the O Force) General Gerow (5th Corps), General Huebner (1st Infantry Division) and General Hoge (1st Special Engineer Brigade). Heading towards Omaha Beach, it served as a floating staff throughout the battle of Normandy.

In early 1945, USS Ancon was deployed to the Pacific to continue the war.