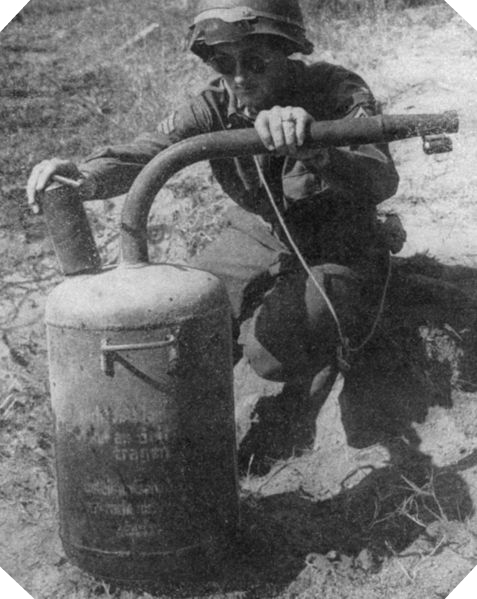 When the Germans invaded the Soviet Union in Operation Barbarossa in 1941, they discovered a Russian static flamethrower called FOG-1. German engineers are inspired to create their own model to reinforce their static defense equipment for all special points (roads, bridges, port areas, sensitive areas, coastal areas …).

The following year, in 1942, the static flamethrower “Abwehrflammenwerfer 42” enters the German army. It is a main cylinder with a capacity of 29.5 liters, with a miniature cylinder and a tube to project the flames. The main cylinder is usually buried in the ground and only the tube has to pass in order to reduce its visual signature.

The firing is triggered either by its user or by the victim when the static flamethrower is connected to a trap wire. The flame, 2.7 meters high and 4.5 meters wide, reaches a distance of 27 meters for 1.5 seconds.

The Abwehrflammenwerfer 42 was used until the end of the Second World War and numerous copies were installed along the Atlantic Wall to defend access to German support points along the coasts.