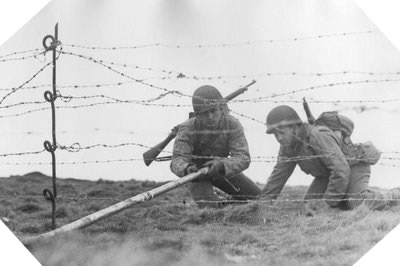 In the early 1910s, the British studied material capable of breaking through a network of barbed wire. If the sappers are equipped with shears, such a procedure is slow and endangers the life of the engineers soldiers since an obstacle is beaten by the fires. Military engineers have the idea of ​​using the firepower of an explosive more efficient than a hand grenade and easily transportable by the infantry.

In 1912, Captain McClintock of the British Army of Bengal in India (in Bangalore, very precisely) developed this device: he imagined a metal cylindrical tube several meters long that could fit into other tubes in order Increase the area of ​​the explosion. Filled with explosives, these cylinders are introduced through the network of barbed wire: explosion, the metal casing breaks down into multiple fragments that destroy the wires and open a way of about three meters wide.

The US military re-used this process in the early 1940s and produced a large-scale torpedo M1A1, known as bangalore, from the name of the city where the tube was designed by Captain McClintock. This torpedo consists of several cylinders (connectable to each other) 1.5 meters long and 5 centimeters in diameter each consisting of 3.85 kilograms of TNT.

Used on 6 June 1944 by the engineers’ units on the beaches and near the German defensive installations in order to create breaches in the numerous barbed wire networks set up by the Germans, the bangalore is immortalized by the two films The Longest Day and Saving Private Ryan.

Today, the bangalore is still used in modified version by many armies throughout the world.