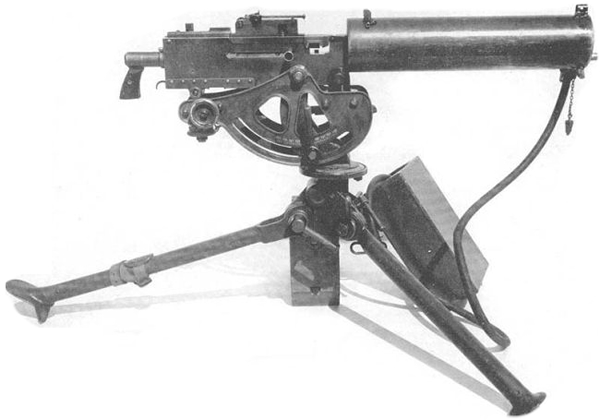 It was in 1900 that John Moses Browning launched his study project to develop a water-cooled machine gun. The first prototype is available the following year: this model is much lighter than its foreign contemporaries, including the German MG 08 and the English Vickers.

Before the First World War, the American Army was not particularly interested in this machine gun, but the entry of the United States into the war in 1917 changed the situation. In order to impress the soldiers, Browning organized a shooting session with several of his machine guns: the first shot 40,000 shots in several incidents. The second opens the fire continuously for 48 minutes and 12 seconds without stopping! The US Army immediately adopted it as one of its two main machine guns (the other being the 8 mm Hotchkiss M1914). However, only 1,200 models of the Browning 1917 are actually used on the front because of delivery times. In 1919, Browning produced another air-cooled machine-gun, the 1919.

In 1930, the Browning 1917 machine gun was modified and the new version, called 1917A1, was used during the Second World War. It is equipped with M2 cartridges, ammunition particularly powerful. Due to its weight and its installation time, the use of this machine gun is limited to an essentially static use. The Browning 1917A1 is used in particular during the Battle of Normandy.

Several examples of this machine gun were used during the Korean and Vietnamese wars. Several irregular armies around the world continue to use it today.