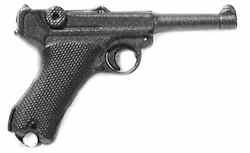 The Luger P-08 pistol is definitely one of the most well-known and sought-after handguns of the entire Second World War.
His name, Parabellum, comes from the famous Latin motto “Si vis pacem, para bellum“: “If you want peace, prepare yourself for war.”

Drawn by the German engineer Georg Luger, already inspired by the plans made by Hugo Borchard, the P-08 pistol began to be produced from the year 1898.

First used during the First World War, this handgun proved to be very effective and inexpensive, and was thus produced again for the Second World War. Many countries have manufactured pistols inspired by the P-08, notably Switzerland, after purchasing the manufacturing license.

Its particular design made the Luger P-08 famous, and each allied soldier wanted to have at least one copy of this weapon, which in fact became barter currency during the Second World War in American companies.