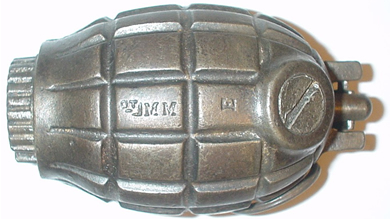 The Mills No. 36 grenade was developed in May 1918, at the end of the First World War, by British industries and is referred to as the “Mills Bomb”. It has a time delay of 4 or 7 seconds depending on the version. On the Great War battlefields, the Germans sometimes returned the British grenades with a delay of 7 seconds.

For the Second World War, only the 4 second versions were produced and endowed in the British army. Its serrated shape allowed to produce a very large number of shrapnels during the explosion, which would cause a maximum of damage.

Mills bomb No. 36, in service in the British Army until the 1960s, is known as “pineapple” due to its serrated structure.

Lethal range: up to 35 meters