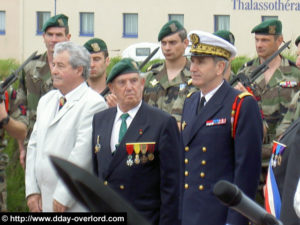 Léon Gautier was born on October 27, 1922 in Rennes, Britanny, France. At the age of 16, he worked as a body builder but the Second World War broke out that same year. Wishing to do his patriotic duty, he tries to commit himself but at his age, only the Navy recruits, which is not to disturb the Breton. He was then recruited as a gunner on board the battleship Courbet, and took part in the defense of the port of Cherbourg and the mouth of the Vire in Normandy against the German Kriegsmarine, exactly four years before the Normandy landings. On June 20, 1940, the Courbet traveled to England to join the French Free Forces where it was used as an anti-aircraft building for the defense of Portsmouth. Léon Gautier took the opportunity to learn about the means of continuing the war within the British army. He nevertheless intends to speak of the Free French Naval Forces and undertakes, on 13 July 1940 in London, aboard the trading vessel “Le Gallois” which transports ore across the Atlantic. It was during one of the crossings that his convoy was attacked by the formidable German submarines, the U-Boats, which sank several ships. Helpless, Leon watches the sailors lost at sea, calling for help and left by the other ships, in accordance with orders. This fact deeply marked the young Leon who continued to make nightmares after the war.

Léon Gautier then volunteered aboard the Le Surcouf submarine until January 1941 and served as a marine rifleman, passing through Cameroon, Lebanon and Syria. He learns the creation of an elite unit open to the French, the commandos, and decides to try his luck. After successfully completing this formidable and dreaded training course in Achnacarry, Scotland, he joined the Troop 8 in the 1st Marine Commando Battalion led by Commander Philippe Kieffer. 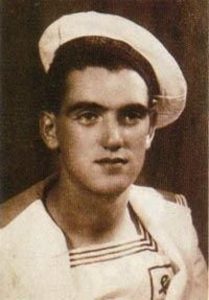 Léon Gautier before the battle of Normandy

In 1943, during one of his many guards, he noticed a woman who seemed to search the headquarters transmission room. Without hesitation, he asks her to justify her presence in the military zone, also high security: the young woman introduces herself, her name is Dorothy Banks and works for the postal and telegraph services. Without being impressed by the French who is under the spell, she asks him in turn to introduce himself. Leo executes and immediately invites him to dinner. Dorothy was wounded in 1942 in Calais during the German bombing, receiving a shrapnel in the head and remaining 16 days in a coma: she had to heart to help and to work for the armed forces of her country. They get engaged a few weeks later …

During the crossing of the Channel towards Normandy, Léon remembers with little rejoicing the turtle soup that was served to the soldiers. He had his head elsewhere, towards the fights to come. Indeed, on 6 June 1944, the French commandos landed at Sword Beach in front of the commune of Colleville-sur-Orne (today Colleville-Montgomery). The Troop 8, to which Léon belongs, is to seize, after the disembarkation, various German points of support spread over 1.8 kilometers along the shoreline to the telephone exchange and the defensive complex of the Casino in Ouistreham. After this action and after bloody fighting, Léon and his brothers-in-arms recover their bags at 11h30 and start their progression towards Bénouville (where they cross under the fire the famous Pegasus Bridge) and then the municipality of Amfreville : They held the position there and then fought for 78 days and 78 nights, constantly harassed by German patrols and snipers. Léon Gautier and the French commandos finished the battle of Normandy at Saint-Maclou in the Eure. He was repatriated to England and unfortunately injured an ankle at the end of August and began his re-education, which caused him to miss the fighting which had been fought by his unit in Holland in September 1944.

After the war, Léon Gautier worked for seven years in England as a workshop leader and moved to Africa, Cameroon and Biafra, within the French West African Company. Dorothy, whom he married on October 14, 1944, gave him two children: Jacqueline and Jeannette. Back in France, he resumed law studies in the Oise and became an automobile expert after obtaining the state patent. He then remains very discreet about his military past, in particular because the professional opportunities and the support of the State were rare in metropolis for the former commandos who served under the British uniform. But after going to an exhibition organized by the Ouistreham Tourist Board, a museum project dedicated to the French Normandy landing commandos was born in 1982. The whole family is involved in this initiative which gives birth to the No4 Commando Museum: Dorothy mended the uniforms while Jacqueline worked there. 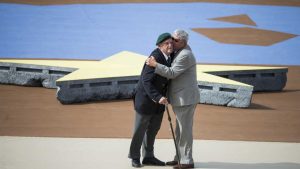 On 6 June 2014, at the international ceremony of the 70th anniversary of the landing and the battle of Normandy, veterans Léon Gautier and Joannes Börner closed the commemorations.
Photo: REUTERS – Ian Langsdon

Léon Gautier, who finally settled in Ouistreham, dedicates his entire retreat to the memory of the French commandos. Organizing personally visits to the No4 Commando museum, participating in numerous commemorative ceremonies and agreeing to give its name to many streets in the Normandy municipalities and the Colleville-Montgomery primary school. He became friends with Johannes Börner, a German veteran of the Battle of Normandy who settled in Ouistreham in 1969, whose shared accolade on June 6, 2014 during the commemoration of the 70th anniversary of D-Day is Remained in the memories as the very beautiful symbol of peace regained.

Léon Gautier received the distinction of Commander of the Legion of Honor by the French Prime Minister on August 23rd, 2016.

Back to the French military personnel biographies