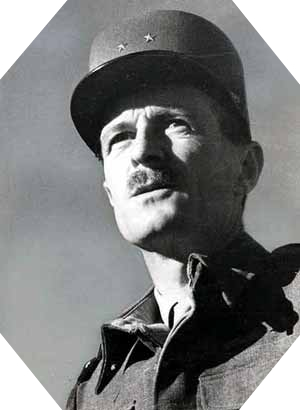 Philippe de Hautecloque was born on November 22, 1902 in Belloy-Saint-Léonard in the Somme. He moved very early towards a military career and prepares for Sainte-Geneviève the competition of the Saint-Cyr military academy that he joined in 1922, promoting “Metz and Strasbourg”, ranking at the end of his initial training fifth out of 344. He chose the Saumur cavalry school and finished it major.

He was transferred to Morocco where he participated in the Rif war and in 1929 took command of the 38th Goum. Instructor at Saint-Cyr in 1931, he injured himself during an exercise on horseback which cost him to use a cane for life. In 1938, he joined the School of War which he once again major a year later.

Staff captain of the 4th Infantry Division in May 1940, he was captured a first time and then escaped before resuming the fighting. A prisoner again in June 1940, he escapes and crosses all of France from north to south to go to London. It is in England that he takes the pseudonym of “François Leclerc” in order to protect his wife and six children against any reprisals. Philippe de Hautecloque meets General de Gaulle on July 25, 1940 and receives a mission to rally the armed forces of French Equatorial Africa to those of Free France: in August 1940, Cameroon, Congo and Chad take the party de Gaulle, then Gabon in November of the same year.

From Chad where Leclerc is the military commander, he carries out bold raids of several thousand kilometers with few means against the Italian positions and seizes in particular the oasis of Koufra, on February 28th, 1941, where he pronounces with his men the memorable oath of March 2: “Swear not to lay down the arms when our colors, our beautiful colors, will float on the cathedral of Strasbourg”. His combat actions continue in Libya in 1943.

Appointed general, Leclerc wins England where his army is equipped by the Americans and prepares to land in Normandy. On August 1st, 1944, his 2nd armored division (DB) attached to the 3rd army of General Patton takes foot on the beach of Saint-Martin-de-Varreville then participates in the liberation of Argentan and Alençon before closing the pocket of Falaise end of August with the Allied armies.

Supported by de Gaulle, General Leclerc receives the order of the Americans to open the way to Paris where he receives on August 25, 1944 the surrender of German General von Choltitz. On November 23, 1944, he liberated Strasbourg and as he had promised Koufra, the tricolor flag again floats on the single spire of the cathedral Strasbourg.

His troops then continued fighting on German territory and the French were the first to enter Hitler’s Eagle’s Nest from Kehlsteinhaus in Berchtesgaden. On May 8, 1945, the day of the surrender of German forces, the 2nd D.B. executed in Bad Reichenhall in Bavaria twelve French volunteers who served in the SS (Charlemagne Division) troops who had been captured by American troops.

Appointed head of the French Expeditionary Force in the Far East, Leclerc signed in the name of France the act of capitulation of Japan on September 2, 1945 which marks the official end of the Second World War. However, temptations only increase in Southeast Asia after the departure of the Indochinese Japanese who regains its status as a French colony and Philippe Leclerc committed to a political resolution of Indochinese claims.

In 1946, Leclerc was appointed inspector general in North Africa where he died in a plane crash on 28 November 1947 in Jebel Aïssa near Colomb-Béchar. From this incident came theories supporting the hypothesis of an assassination of General Leclerc, which did not follow through. Raised as a posthumous Marshal in 1952, Philippe Leclerc de Hautecloque was buried in the crypt of the Invalides in Paris, after being transported for the last time under the Arc de Triomphe where the crowd paid him a last homage.