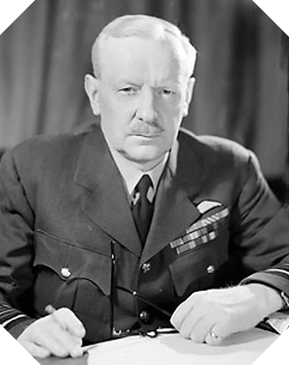 Arthur Travers Harris was born on April 13, 1892 in Cheltenham, Gloucestershire. At the age of sixteen, following average school results, his parents sent him to Rhodesia where he emancipated for six years by performing multiple tasks to earn a living. In 1914, he joined the 1st Rhodesian Regiment and served in South Africa before returning to England where he joined the Royal Flying Corps (ancestor of the Royal Air Force, R.A.F.) as an officer. He then fought on the battlefields of France in 1917 in the No. 45 squadron.

When the Great War ends, it remains in the R.A.F. as an instructor and then moved abroad as in India, Iraq or Syria. He also takes advantage of this period to develop bombing tactics using time bombs as well as night shelling involving special training. From 1927 to 1929, he was a trainee at the Army Staff College in Camberley and then again worked on bombing tactics, especially at night. From 1934 to 1937, he was appointed to the Ministry of Air as Director of Planning.

He was later appointed to Egypt as the Air Staff of the Middle East. In 1938, he was placed at the head of the group of bombers No. 4 before commanding the forces of R.A.F. in the Middle-East. With the outbreak of the Second World War, Arthur Harris returned to England where he took command of the group of bombers No. 5 (No. 5 Bomber Group). In February 1942, he was appointed head of the Bomber Command.

At the beginning of the war, the bombers used by the British have a radius of action and ammunition carrying capacity: outclassed by the other military powers, these devices do not offer Great Britain a capacity of destruction sufficient . In addition, crews are not skilled enough to perform accurate strikes. Harris decided to change the situation by not hesitating to learn from the lessons of the German air attacks during the Spanish Civil War. He also launched the production of new bombers such as Lancaster, Halifax or De Havilland Mosquito. This effort earned him the nickname “Bomber” Harris.

Also in 1942, Arthur Harris is responsible for carrying out the new German bombing strategy developed by Professor Frederick Lindemann. For the duration of the war, it bombed the industrial centers and the big German cities: 850,000 tons of bombs were dropped in total on Germany.

The terrible bombardment of Cologne (Operation Millenium) on the night of May 30 to 31, 1942, which saw the deployment of 1,000 bombers, then that of Hamburg (Operation Gomorrah) in August 1943 transformed its nickname into “Harris the Butcher” (Butcher Harris ). But he continues to believe in his method because, he says, Germany has “sown the wind, it reap the storm.”

Because the objectives of these bombings are not only to destroy the German war effort, but to hit the civilian population to create doubt and stupor within it, to initiate a refugee problem for the Nazi government on its own territory . Civilians also become targets of attacks.

As the attacks progressed, the Germans prepared for air raids and inflicted heavy casualties on Allied airmen, but they lost the battle in the air and were unable to stop American and British bombers. intervene.

In 1944, Arthur Harris was responsible for preparing the Allied invasion in Normandy by concentrating the efforts of its bombers on targets in France such as the rail network or the facilities of the Atlantic Wall. The use of aerial bombardment is systematic before each ground operation: on July 18, 1944, before the launch of Operation Goodwood in the Caen region, more than 7,800 tons of bombs were dropped by 2,077 bombers.

Many controversies were born after the massive new bombings of German cities in 1945, such as February 13 with the Dresden raid which made tens of thousands of civilian casualties. Because if the end of the war seems close, the quantities of bombs dropped on the German population do not stop increasing. In spite of these terrible losses in human and especially civil lives, Arthur “Butcher” Harris acceded to the honorary rank of Marshal of the Royal Air Force in 1946.

Disappointed and touched by the many criticisms made of him, Harris settled in 1948 in South Africa. Only Winston Churchill manages to return him to the United Kingdom by offering him the dignity of Baron. Arthur Harris died on April 5, 1984 in Goring-on-Thames.

In 1992, Queen Elizabeth inaugurated a marshal’s efigie statue in front of the Royal Air Force church: the latter remained for several months under permanent police protection, having been the target of protesters considering that Harris was a criminal of the Second World War. Despite this, he was made an honorary citizen by the municipality of Caen (a martyr city that has suffered enormously from Allied bombing) and an avenue even bears his name. As Winston Churchill rightly said, “History is written by the victors”.

Arthur Harris is most certainly one of the most controversial senior allied officers of the Second World War. Such acts of intentional bombardment of the civilian population would now be considered as war crimes against humanity.