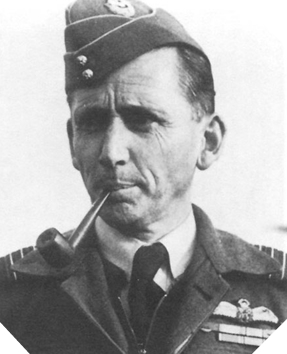 Arthur Tedder was born on July 11, 1890 in Glengoyne, Scotland, south of Glasgow. In 1909 he entered Cambridge at Magdalene College where he studied. He is passionate about history and achieves an excellent academic level. At the same time, he enlisted as a reservist in the British Army and served as a second lieutenant in the Dorsetshire Regiment. In the summer of 1912 he went to Berlin to learn German. It is perhaps the preponderant role of the Foreign Ministers at this time that makes him want to pursue a career as a politician.

But entry into the First World War changes its destiny. In February 1914, when the war seemed inevitable, he joined the colonial troops as an aspirant and served in Fiji. In September 1914, he decided to return to England. Appointed lieutenant on January 10, 1915, he was seriously injured a month later while serving at Wyke Regis in Dorset.

Set aside from many physical activities, he asks for his transfer to the Royal Flying Corps, the predecessor of the Royal Air Force. Having been accepted to be trained as a pilot, he trained for a whole year and in June 1916, his squadron (No. 25 Squadron Royal Flying Corps) was deployed in France. Promoted to Major on 1 January 1917, he was transferred to Egypt where he took command of No. 67 Squadron on 25 June 1917.

After the war, he served as a squadron commander at Bircham Newton and flight instructor from 1923 until 1936, at various ranks and positions. Appointed Air Officer Commanding of the Air Force in the Far East, he took command of British units deployed in the region, both in Burma, Hong Kong and Borneo. In 1938, Arthur Tedder served as General Manager for Research at the Air Force Ministry.

Shortly after the start of the Second World War and despite the fact that his relations with Prime Minister Winston Churchill were not optimal, he was appointed commander-in-chief of the British Air Force in the Middle East. In May 1941 he led the evacuation of Crete Island and the Crusader operation in North Africa.

In January 1942, he became Knight. It sets up in North Africa a tactic of radical bombing, nicknamed by the military the “Tedder carpet”, in reference to “carpet bombing”, the carpet of bombs. In April 1942, he was appointed Air Marshal and took part in the Battle of El Alamein, from October 23 to November 5, 1942. At the end of the following year, he was temporarily promoted to Air Chief. Marshal and takes command of the Allied Air Forces in the Mediterranean, thus participating in preparations for the invasion in Sicily and Italy.

In 1943 his wife Rosalinde Maclardy died tragically before his eyes in the crash of his plane in Egypt.

His experience in the field of air operations preparation led him to assist General Eisenhower as Supreme Allied Commander in the planning of Operation Overlord. His first meeting with Ike was in December 1942 and the two soldiers got along very well. But this co-ordination post is not warlike because it does not directly command units. He regularly intervenes in the planning of the missions entrusted to General Trafford Leigh-Mallory, commander of the Allied Air Forces for Operation Overlord. On several occasions, he opposed the General Montgomery who led the command of the Allied Ground Forces and openly criticized his strategic choices, particularly in the Caen area where Anglo-Canadian troops difficult to cross the German lines. Tedder even asks Eisenhower to withdraw his command, without which it is without effect.

At the beginning of 1945, when the Germans launched Operation Nordwind and the Allies are in trouble in the Ardennes, Arthur Tedder is sent to the Soviet Union to ask Stalin to increase the armed pressure to the east. to relieve the western front. He is again sent as the representative of General Eisenhower to sign the treaty of unconditional surrender of the Germans on May 8, 1945.

After the Second World War, Tedder was appointed head of the British Air Force from 1946 to 1950. At that time he wrote the text “Air Power in Modern Warfare”, 1947). He continues to write and even becomes the Chancellor of the University of Cambridge. Appointed as British representative to the North Atlantic Treaty Organization (NATO) Military Committee in 1950, he also wrote his memoirs and developed his curiosity in the field of astronomy.

In the last years of his life, Arthur Tedder suffers from Parkinson’s disease. He died during surgery in Surrey, England, on June 3, 1967, when he was 76 years old.