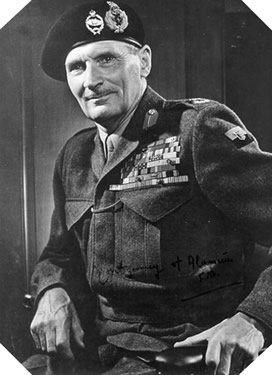 Bernard Shaw Montgomery was born in London on November 17, 1887.

He enlisted in the Royal Warwickshire Regiment in 1908 and served a few years later in India. He was seriously wounded on the French front during the First World War, but after a long stay in a military hospital, he was sent back to combat in 1916. He appeared as a real leader during the conflict, he excelled in particular in physical preparation of his men and at the end of the “Great War”, he is already Chief of Staff of the 47th London Division.

At the beginning of the World War II conflict, in 1940, he commanded the 2nd British Army Corps. It does not escape the terrible attacks of the German forces which forces it to fall back. He evacuated his forces by Dunkirk and managed to connect England on June 1, 1940.

In 1942, the 8th British Army was defeated in North Africa by General Erwin Rommel’s Afrika Korps soldiers. In August of the same year, Montgomery was appointed by the British Prime Minister, Winston Churchill, at the head of this 8th Army, and in November 1942, German troops were beaten at El-Alamein and had to retreat to Egypt. . It was then that Montgomery had a lot to say about him, and he was given the nickname “Monty”.

Sent to Sicily, Bernard Montgomery fights with the 8th Army alongside the 7th US Army commanded by the fiery General Patton. Very quickly, the relations between the two generals deteriorate.

The English general then prepares the invasion of Italy, once conquered Sicily, and landed on September 3, 1943 with under his command the 5th and 10th British Corps, the 2nd Polish Corps and the 1st Canadian Corps south of the Italy in Reggio di Calabra.

On August 19, 1942, the Allies had “tested” the defenses of the Atlantic Wall by sending Canadian forces to attack the Dieppe beaches during Operation Jubilee, to prepare for a larger landing, which will take place in Normandy.

To organize this great offensive, General Montgomery is recalled to London by the supreme chief of the allied forces: General Dwight Eisenhower. He was then placed at the head of the 21st Army Group, which he commanded during the Normandy campaign until the German surrender on May 4, 1945.

In Normandy, his command is much criticized by Allied military leaders, who are annoyed by the poor progress of British troops in the Caen region. Some, like the chief of the Allied Air Forces, Arthur Tedder, even propose to dismiss him, because Montgomery takes the liberty to modify the plans previously fixed on May 15, 1944 in London. But the decision-making of “Monty” is encouraged by Winston Churchill himself.

The relations are very tense during the Battle of Normandy with notably the American pilots who reproach Monty for not conquering enough ground and thus it does not allow them to install aerodromes.

But relations are also tense with Canadian general officers, who believe that General Montgomery uses Canadian troops in the manner of British troops.

On September 1, 1944, Bernard Montgomery was elevated to the rank of Marshal and received several honorary distinctions at the end of the Second World War: he became First Vicomte of Alamein, received the distinction of Chief of the Imperial General Staff between 1946 and 1948 as well as the Order of the Garter medal, in 1948 he became chairman of the West European Chiefs of Staff Committee until 1951 and in 1951 he became deputy commander in command supreme ally of Europe until his retirement in 1958.

The same year, he publishes his memoirs under the title of “Memoirs”.