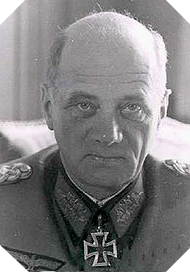 Hans von Salmuth was born November 11, 1888 in Metz then under Prussian domination. He enlistes September 19, 1907 in the Imperial Army and took part in the Great War. In 1918, promoted to captain, he decided to make a career and stayed in the Reichswehr.

Colonel on May 1, 1934, he served in the staff of the 2nd Corps until August 1937. Promoted General, he was appointed to the staff of the 2nd Army before taking the position of Chief of State- Major of the North Army Group (commanded by Fedor von Bock) in 1939. He participated in the invasion of Poland and then commanded Army Group B during the French Campaign in 1940.

The following year, von Salmuth was sent to the Russian front at the head of the 30th Corps with which he participated in Operation Barbarossa. From February to July 1943, he commands the 2nd Army. The following month, he took command of the 15th Army (18 divisions strong) which then stationed in the Pas-de-Calais, in a sector likely to be chosen by the Allies to disembark massively and open a front to the Where is.

These 250,000 pre-positioned soldiers in Normandy represent a significant danger for Operation Overlord, so the Allies are developing a series of deception missions as part of Operation Fortitude, which in particular deceive von Salmuth . June 6, 1944, the latter is convinced that the landing in Normandy is a diversion and gives no order of movement towards Calvados.

The 15th Army is waiting for a hypothetical landing in the Pas-de-Calais which does not take place and it is sent to Lower Normandy at the end of August, when the Allies can no longer be pushed back to the sea. the consequences of the inactivity of his army during the two months of battle in Normandy, Hans von Salmuth was deprived of his command, especially since he was in contact with the officers plotting against the Führer.

At the end of the war, he was taken prisoner and tried at the Nuremberg trial. Sentenced in 1948 to twenty years in prison for war crimes and crimes against humanity, he was finally liberated in 1953. He died in 1962 in Heidelberg and is buried in Wiesbaden.