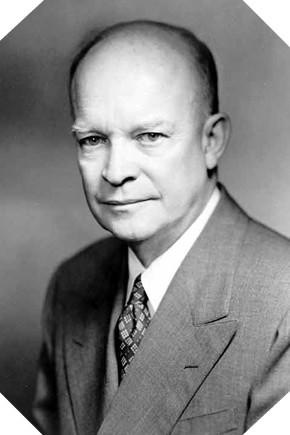 Dwight D. Eisenhower was born on October 14, 1890 in Denison, Texas, USA, and raised in Kansas, USA, with his six siblings.

Gifted particularly well in sports, he entered the school of officers of the American Army, West Point, and left lieutenant. Very effective as a director of the Armed Forces, he is appreciated by his superiors and quickly wins.

When the Japanese attacked the US naval base at Pearl Harbor on December 7, 1941, Dwight Eisenhower was a brilliant general. He received the command of Allied troops in November 1942 and organized the invasion operations in North Africa.

With these experiences, he is appointed Supreme Allied Commander Europe and prepares for the invasion of Normandy, which is to precipitate the fall of the Third Reich. The objectives he has set are met, but the starting order still has to be given: on June 4, 1944, thousands of Allied soldiers await his decision. After delaying the launch of the 24-hour Operation Overlord due to poor weather conditions, he now utters a historic sentence while meteorologists predict a slight improvement in the Channel: “Ok, let’s go!” (“Okay, let’s go!”)

Operation Overlord is a success, despite the difficulties encountered during the Battle of Normandy, including the bad relations he has with General Montgomery throughout the fighting. He travels to the Battlefields of Falaise Pocket, where the German armies were surrounded and then decimated in mid-August 1944. He expresses his feeling to the journalists who accompany him: “I feel a terrifying sentence while thinking to the parents of our young soldiers who sacrificed themselves during these clashes, but I can not help but think of the new generations, who will now be able to live in a free world thanks to the sacrifices of their fathers. “

After the Second World War, Dwight Eisenhower became president of the University of Columbia (United States), and in 1951 he moved to his Paris headquarters as supreme leader of NATO forces. A year later, in 1952, he chose to run in the US presidential elections and won a large majority of votes.

In the midst of the Cold War, tensions between US and Soviet blocs are increasing. Eisenhower decides to calm the situation by playing the card of transparency: the two powers exchange military information and authorize the aerial flight of their country by enemy planes, unheard since the end of the Second World War.

In November 1956, Dwight D. Eisenhower was re-elected President of the United States of America. He then undertakes a vast social program, aimed at combating racial segregation and doing his utmost to ensure that “there are no two social classes in the United States”. He has worked tirelessly for his country to remain the leading military power, launching major modernization projects and multiplying peace actions abroad.

But since 1954, the date of his first heart attack, Dwight Eisenhower’s health is very fragile. In 1961, he left the White House and began a series of periods during which he would be treated. He died on March 28, 1969.