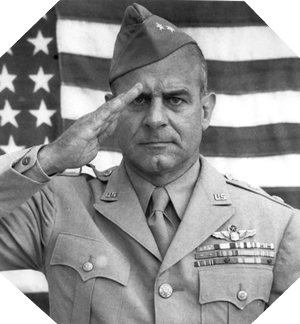 James Harold Doolittle was born on September 14, 1896 in Almeda, California. He studied at the prestigious University of Berkeley before joining the Signal Corps Reserve in October 1917 as a flying cadet (aspiring pilot). He is trained in aeronautics at the Rockwell Field Military School in California. Although he is not deployed on the battlefields of France, he does air patrols along the Mexican border.

After the First World War, he resumed his studies at Berkeley where he graduated in 1922 from a Bachelor of Arts. His passion for aviation led him to embark on the adventure of the pioneers of the American Air Force, including aboard the DeHavilland DH-4. For his excellent service (he travels from the USA to Florida in California in 21 hours and 19 minutes only), he is decorated with the Distinguised Flying Cross.

In July 1923, Doolittle entered a prestigious new American university, the Massachusetts Institute of Technology (M.I.T.), where he wrote his thesis while conducting flight tests for the army. Two years later, he received his doctorate in aeronautics.

While conducting demonstration flights in South America, he was injured in April 1926 and had to undergo rehabilitation for almost a year. After this period, he devotes himself to the development of the instruments that he contributes to developing (he performs a flight only with the help of instruments, from take-off to landing, without visual on the outside). He resigned from the army in February 1930 but continues to maintain links with the Air Force. In the years that followed, he participated in several races and challenges in the United States and won many trophies.

His two sons were born during the period between the two wars, James Jr. and John who both become pilots in their turn.

In 1940, while the war settled in Europe, James Doolittle was appointed head of the Institute of Aeronautical Sciences. He handed the uniform on July 1 of the same year: he is called to provide his advice to turn the production lines of civil companies into military companies to build aircraft. For this purpose, he is also sent to England in August to benefit from the experience of the countries at war and their air power.

Promoted to Lieutenant-Colonel on January 2, 1942, a month after the Japanese attack at Pearl Harbor, Doolittle was assigned to the Air Staff. He receives the secret mission to prepare an attack in the heart of Japan in retaliation for Pearl Harbor. Thus, he develops the operation and has modified sixteen B-25 bombers that are able to take off from the U.S.S. aircraft carrier. Hornet. He personally took part in the raid on the Japanese cities of Nagoya, Osaka, Tokyo, Kobe and Yakohama on April 18, 1942. His aircraft landed in China near Chuchou and his crew was taken care of by Chinese fighters before returning to the States. United States to continue the fighting. If this raid has only slightly affected the Japanese industrial sectors, it has made Japanese leaders aware that they are not untouchable. As a reward for this action, he is decorated in the White House by President Roosevelt of the prestigious Medal of Honor, the US Congressional Medal of Honor.

While once again in the United States after his raid in Japan (he is filmed by actor Spencer Tracy in the movie Thirty Seconds Over Tokyo released in 1944), Doolittle is named General in July 1942. He takes the lead of the 12th Air Force based in North Africa and continues to participate personally in aerial combat. He then participated in the rise of the 8th Air Force. In March 1943, he was appointed Commander-in-Chief of the North African Strategic Air Forces, which brought together the US and British Air Forces. In November of the same year, he commanded the 15th Air Force operating in the Mediterranean.

Finally, from January 1944, James Doolittle is appointed head of the 8th Air Force that participates in the Battle of Normandy. He reorganized the tactical principles of air operations, particularly in the area of ​​bomber escorts, and deployed his unit in the Pacific to conduct operations on Japanese territory.

After the Second World War, General Doolittle left active duty and resumed his Reservist status on May 10, 1946. Vice President and then President of the Shell oil company, he is also President of the Air Force Association. Appointed advisor in the study of military ballistic and space programs. He receives an impressive amount of decorations – both civilian and military, from the United States and other countries such as France and England – to reward his commitment and courage in the development of American aviation: in 1985, President Reagan personally hands him his four-star general and the Freedom Medal. He is the only one to have been awarded the two most prestigious American medals (Medal of Honor and Freedom Medal).

James Doolittle died on September 27, 1993 in Pebble Beach, California and is buried alongside his wife Josephine at Arlington National Cemetery.