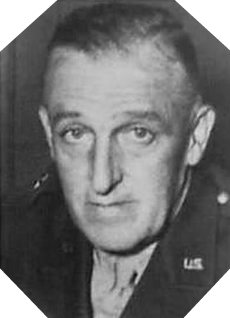 Norman Cota was born on May 30, 1893 in Chelsea, Massachusetts. In June 1913, just before the First World War, he was accepted at the famous American Military Academy at West Point. At the end of his schooling, he chooses the infantry. Instructor at West Point then at the infantry school, he joined the War College in 1936.

When World War II broke out in Europe, he was successively second officer of the 16th Infantry Regiment of the 1st Division, located in Fort Jay, New York, intelligence officer and then head of the organization’s training bureau of the 1st infantry division until June 1942, when he was promoted to the command post of that same division.

In February 1943, he participated in the landing in North Africa (Operation Torch). Shortly after he took part in writing a report on the airborne assault in Sicily (Operation Husky), he was sent to England with the new rank of Brigadier General as US adviser to the Combined Operations Division of the European Theater. of Operations (Combined Operations Council for the European Theater), with special responsibility for the planning and training of units for landing exercises.

Prior to the Normandy landing, Norman Cota was second in command of the 29th Infantry Division, which was to land at Omaha Beach on June 6, 1944. He initially opposed the schedule of the initial assault, planned after dawn, and defends the idea of ​​a landing just before sunrise. But he takes note of the decision of the Allied High Command and draws the tactical conclusions for his men by explaining to them that certainly the bombardments of the navy and the air force are reassuring, but they systematically cause general confusion. : Norman Cota highlights the spirit of initiative, courage and self-sacrifice.

On D-Day, Cota arrives at 07:30 at Omaha Beach, Dog White area, with the 116th Regiment of the 29th Infantry Division, while the battle is in full swing. The LCVP-type landing barge carrying it is damaged by machine gun fire and mortar shell explosions: three American soldiers are killed directly leaving the small barge. Norman Cota is the most senior ranking officer on the beach on June 6, 1944 and is the source of a sentence pronounced on the beach, which has since gone down in history. Cota asks soldiers set by enemy fire near him: “Which unit do you belong to?” “5th Rangers!” Answers one of them. To which the general replies: “Rangers, show the way!” (“Rangers, lead the way”, which is today the motto of the contemporary units of American Rangers).

In the movie The Longest Day, the actor Robert Mitchum interpreting Cota pronounces another sentence (“There are two kinds of people who are staying on this beach: those who are dead and those who are going to die. Now let’s get the hell out of here. “) which was actually delivered on the same day and at the same place by Colonel George A. Taylor commanding the 16th Regiment of the 1st Infantry Division.

He became famous for personally leading the assaults on Omaha Beach and motivating the troops grounded by the heavy fire of German machine guns. It was also he who was at the origin of the opening of the first breach practicable by the vehicles on this beach.

In August 1944, Cota took command of the 28th Infantry Division which marched on the Champs-Elysées on August 29 to celebrate the liberation of Paris. In September 1944 the battle of Hürtgen Forest begins, in the triangle formed by Aachen, Monschau and Düren, east of the border between Belgium and Germany. The 28th Infantry Division participated in these furious battles and suffered very heavy losses. It should be noted that Norman Cota’s son, Lt. Col. Norman Cota Junior, also participated in these fights in the US Army Light Aviation.

After the Second World War, Norman Cota was awarded the Distinguished Service Cross for his actions on the beach of Omaha (since 2004, an American association has been created to receive the highest distinction of the United States of America. America posthumously, the Medal of Honor).

Cota completed his military career in 1946 as Major General. In 1964, he married for the second time, with Alice Weeks-McCutcheon.

He died on October 4, 1971 in the city of Wichita, Kansas, and is buried at the West Point Military Academy Cemetery.