The Ardenne abbey is a pre-monastery abbey built from 1121 to the north-west of Caen.

On the 7th of June, 1944, SS Panzergrenadierregiment headquarters, led by the SS SS and Kart Meyer belonging to the 12th SS Panzer-Division Hitlerjugend counterattack towards the beaches and settled in the abbey in order to take advantage of the point of view offered by constructions. Indeed, from this position, the Germans can observe a large part of the adverse movements in the sector and Kurt “Panzer” Meyer directs his counter-attack which pushes back the Canadians of the 9th brigade of the 3rd infantry division, supported by the Tanks of the 27th armored regiment Sherbrooke Fusilier, at the height of Buron.

S.S. soldiers, determined not to retreat and to die on the spot if necessary, hold this position for a full month. Several Canadian soldiers are taken prisoner during this period and are questioned in the abbey domain. The fighting, particularly violent in this sector, led the soldiers to carry out acts of extreme savagery: within a week of disembarkation, 27 Canadians were coldly executed near the abbey.

General Montgomery set up several operations in order to capture Caen, which was to fall on D-Day, with Operation Perch (June 7, 1944), Operation Epsom (June 26, 1944) and Operation Windsor (July 4, 1944). Operation Charnwood, launched at the dawn of July 8, 1944, was to change the situation: a few hours earlier, one of the most important aerial bombardments of the Battle of Normandy took place: 467 bombers of the Royal Air Strength, 656 pieces of artillery from five different divisions as well as four warships are dedicated to supporting the ground troops, not to mention reinforcements from the US Air Force and allied light fighter-bombers.

Faced with this devastating firepower, Kurt Meyer ordered his men to evacuate the Abbey of Ardenne taking advantage of the darkness on the night of July 8-9, 1944. At dawn, the Canadians of the Regina Rifle Regiment Belonging to the 7th Brigade, took possession of the premises without fighting. 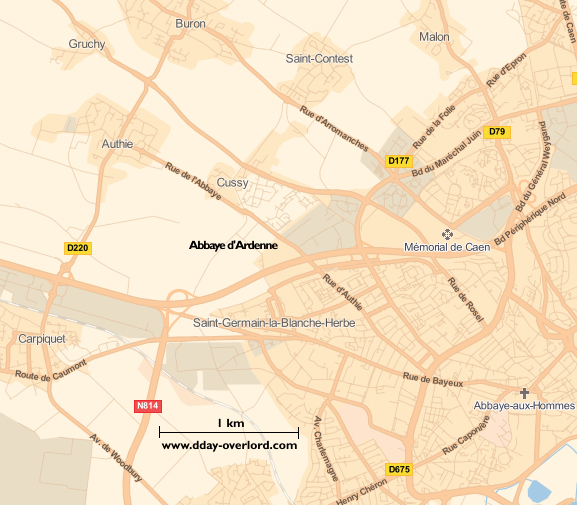