On August 11, 1944, the soldiers of the 2nd French Armored Division (2nd DB) under the orders of General Leclerc were ordered to seize Carrouges while recognizing part of the forest of Ecouves occupied by elements of the 9 Panzer-Division which progress towards Alençon. This city is scheduled to be bombed the next day at 10 am to facilitate the allied maneuver.

On the night of 11 to 12 August, Leclerc personally participated in a reconnaissance of the surroundings of Alençon, guided by Raymond Ciroux, a resident of the city who is also resistant. The head of the 2nd DB finds that the bridges are not undermined and that the city is not strongly defended: he decides to take advantage of it immediately despite the planning of operations of the XV Corps. Leclerc must be fast, encountering during his patrol an enemy reconnaissance vehicle, of which he occupied the occupants belonging to the Panzer Division; The Germans also plan to secure Alençon and its precious bridges over the Sarthe. The French tanks arrive at night from the Ancinnes road and then they take the Rue des Tisons. Leclerc installed his command post at number 31, rue du Pont-Neuf.

At daybreak, this Saturday, August 12, the inhabitants of the city discover that they were released during their sleep. But at 8 o’clock they fear the worst when B-17 Flying Fortress bombers appear on the horizon and approach Alencon in attack formation. The French have installed orange signs of identification on the bridges of the city to inform the Allied aviation of the presence of friendly units in the city: the apparatuses do not drop their bombs on Alençon. The population cheers its liberators and when it discovers that these soldiers speak French, it believes that they are Canadians. After some discussion, the locals discover that they are compatriots and their joy is all the stronger. The civilians come to meet General Leclerc, sitting on a wooden chair in front of his command post or on the parapet of the bridge. The elements of the battle group Warabiot cross Alençon and regroup before continuing the fighting in the late morning.

The commune is definitely free, the French have seized it without fighting and without bombardments. 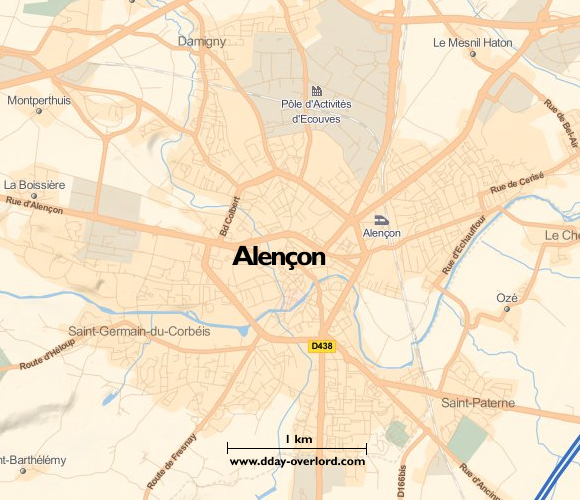