Asnelles in 1944 – Calvados – Battle of Normandy

The town of Asnelles in Calvados is located at the west end of Gold, a beach area dedicated to the landing of the 50th British infantry division. The Allies define Asnelles as belonging to the beach area coded “Jig” of Gold Beach.

This locality is located at the junction between the 352nd and the 716th German infantry divisions. That is why the western outlets are held by the 1st Battalion of the Grenadier-Regiment 916 of the 352. Infantry Division while the rest is under the control of the 716. Infantry Division (Ost Battalion 441 and Infantry-Regiment 736)

The defense of Asnelles consists of two strongpoints baptized Wn 36 and Wn 37. The first is located to the east of Asnelles, at the place La Cabane des Douanes. Two principal constructions form this point of support, one for anti-tank guns of 50 mm (KWK L / 42) and the other for machine guns with several firing points. The Wn 37 is located directly to the north of the commune, at the place called Le Hamel, and consists of a 88 mm gun. A third point of support is located between Asnelles and Saint-Côme-de-Fresné: it consists of an anti-tank wall located directly on the beach, two casemates for anti-tank 50 mm Shelter for staff. It also includes a 50 mm mortar (Gr.W).

On the night of June 5-6, 1944, Asnelles was bombed by the Allied air forces and the navy at the dawn of D-Day. The 1st Battalion Hampshire Regiment and the 1st Battalion Dorsetshire Regiment disembark at 7:30 am while the 2nd Battalion Devonshire Regiment hit the Normandy ground at 8:15 am, supported by the Nottinghamshire (Sherwood Rangers) Yeomanry tanks belonging to the 8th Armored Brigade . If the Wn 36 falls quickly but not without losses, the Wn 37 to the Hamel defends itself with relentlessness. It is necessary to wait for the intervention of a self-propelled gun M7 Sexton which makes a direct shot so that the German position ceases its murderous shot that destroyed six armored English.

Around 8:30 am, the soldiers of the 231st Infantry Brigade managed to penetrate Asnelles and fought furiously to capture the commune. The position of the Hamel does not fall until about 16 hours with the surrender of the last German defenders. The losses in the English ranks are very high: the 1st Battalion Hampshire Regiment counts nearly 180 killed on the evening of D-Day. 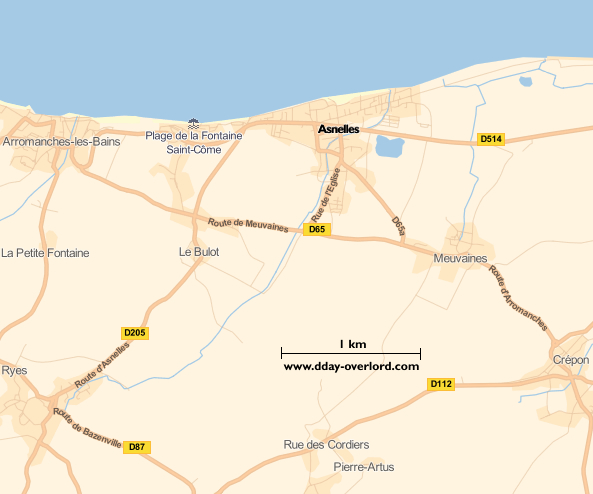