Audrieu in 1944 – Calvados – Battle of Normandy

The headquarters of the SS-Aufklärungsabteilung 12 (12 S.S. Panzer-Division Hitlerjugend) was commissioned by the H.S.-Standartenführer Gerhard Bremer.

In the aftermath of Normandy’s landing, the Panzer Lehr Division set out for the coast to defeat the enemy at sea. Delayed by incessant aerial attacks, the leading elements of the SS-Panzeraufklärungs-Lehr-Abteilung 130 set up in firm defense in Audrieu in the evening of June 7, 1944 after having destroyed several English vehicles. The Allies decided to bomb the village abundantly.

On 8 June 1944, the order was given to the SS-Aufklärungsabteilung 12 to prepare from Audrieu a new offensive towards the coasts. On the same day, the 50th Infantry Division of England was engaged from 8 o’clock in an offensive aimed at breaking the German line of defense: the 8th Armored Brigade was launched in combat with various reinforcements. At 2 pm, the 61st Reconnaissance Regiment was stopped by the S.S.-Aufklärungsabteilung 12 and the Germans made about fifteen prisoners. At 8 pm, Audrieu is at the heart of all the fights with impressive artillery duels that quickly set fire to the whole village: the Allies bombard this commune for exactly one hour and twenty minutes, forcing the Germans to withdraw to the south at Cristot and Hill 103, a land movement dominating the region. The 8th Armored Brigade is then free to seize the ruins of Audrieu.

During the night of 8-9 June, many Germans led by the Abteilungsadjutant Obersturmführer Buchheim managed to infiltrate Audrieu to recover abandoned vehicles during their withdrawal, but they could only save important documents and destroyed radio stations edge. 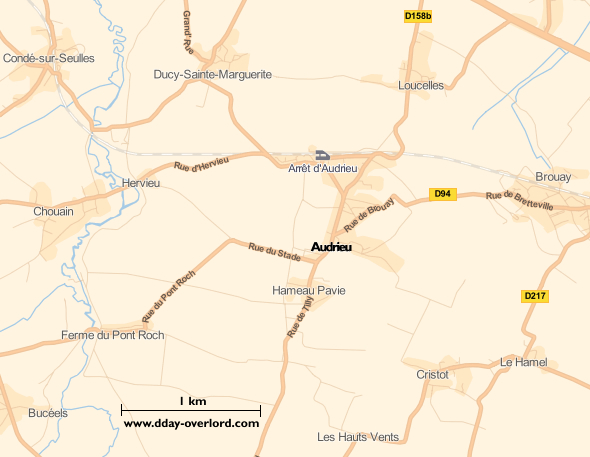