The commune of Authie was to be under allied control on D-Day. However, significant delays delay Canadians who did not seize the locality until June 7, 1944.

On the same day, SS Panzergrenadierregiment 25 led by SS Kart Meyer and belonging to the 12th SS Panzer-Division Hitlerjugend counterattacked towards the beaches and took over Authie, fighting until hand-to-hand to dislodge the Canadians belonging to the SS North Nova Scotia Highlanders 3rd Infantry Division Regiment: 84 Allied soldiers and seven civilians are killed on this one day.

The Canadians of the 9th Brigade of the 3rd Infantry Division, supported by the tanks of the 27th Armored Regiment Sherbrooke Fusilier, retreated to Buron.

Soldiers S.S., determined not to retreat and to die on the spot if necessary, hold this position for a full month. General Montgomery set up several operations to capture the city of Caen: Operation Perch (June 7, 1944), Operation Epsom (June 26, 1944) and Operation Windsor (July 4, 1944). Operation Charnwood, launched at the dawn of July 8, 1944, was to change the situation: a few hours earlier, one of the most important aerial bombardments of the Battle of Normandy took place: 467 bombers of the Royal Air Strength, 656 pieces of artillery from five different divisions as well as four warships are dedicated to supporting the ground troops, not to mention reinforcements from the US Air Force and allied light fighter-bombers.

Faced with this devastating firepower, the St. Lawrence held out, and when the Canadians of the North Nova Scotia Highlanders stormed to take over Authie, an artillery barrage stopped their progress and inflicted heavy losses on them. In spite of everything, the Canadians finally seize Authie in the afternoon of July 8, Kurt Meyer’s men falling back to the Abbey of Ardenne in the evening. The Canadian losses are heavy: 160 of theirs are put out of action and the Sherbrooke Fusilier lost 7 Sherman tanks. 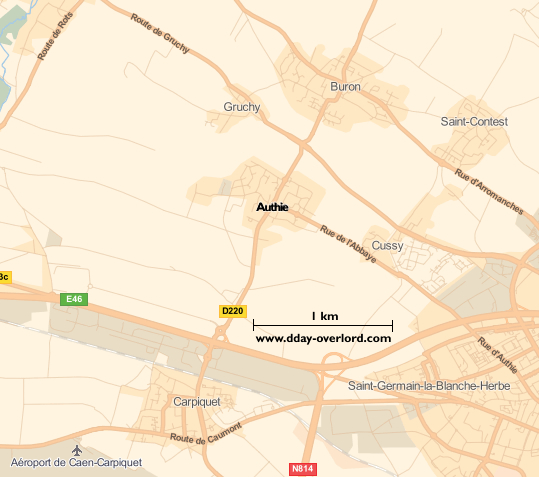