In the spring of 1944, the village of Azeville was occupied by 170 artillerymen belonging to the 2nd company of the Heeresküstenartillerie-Regiment 1261. Under the orders of Hauptmann Dr. Treiber and his deputy, the Oberleutnant Hans Kattnig, they served Coastal encoded battery Stp 133 as well as MKB (Marine Küsten Battery) Azeville. Its construction begins in 1941 and it represents one of the very first batteries to be established on the French territory. Voluntarily located in the immediate vicinity of Azeville, its buildings are painted with the same coloring as the stones of the houses of the village in order to mislead the allied air patrols charged with the intelligence. The battery consists of four casemates: two Regelbau type H650 and two others of the Regelbau H671 type, each protecting a 105 mm Schneider gun of French origin and dating from the First World War.

Abundantly bombed by the Allied Air Force on the night of June 5-6, 1944, the battery was the object a few hours later of an attack carried out by American paratroopers of the 502nd Parachute Infantry Regiment (101st Airborne Division) erroneously dropped in the area. The latter, unable to take possession of the site, retreated south to join their unit. On the dawn of D-Day on June 6, 1944, the 105-mm cannons engaged Allied ships in front of Utah Beach and the American landing on this beach throughout the morning, hampering the inland advance. The Allied navy bombarded the site relentlessly and managed to make a blow to the goal, destroying one of the rooms and the casemate.

In the early evening of June 7, the Americans of the 4th Infantry Division commanded by General Raymond O. Barton are at the gates of Azeville: the 2nd battalion of the 22nd Infantry Regiment is located to the south-east while the 1st battalion of the 12th Infantry Regiment is positioned to the southwest. The second battalion launched its first offensive but was repulsed by a violent counter-attack which cost him many losses. Meanwhile, Azeville’s battery opens fire to stop another American attack at Saint-Marcouf.

On 8 June, the 4th Infantry Division renews its actions to capture the village and its battery. The 1st battalion, which sails to the west at 10 o’clock, is stopped by a barrage before being violently counter-attacked at 14 o’clock by Sturm-Battalion AOK 7 (709. Infantry Division) commanded by Major Hugo Messerschmidt. US infantrymen owe their salvation to the presence of Company B of the 359th Infantry Regiment (which is part of the 4th Infantry Division in Reserve Force), which immediately assists in strengthening the line of contact. The losses are very high in both sides, but a new offensive is planned for the next day, the Americans not wishing to slow down any longer.

Thus, on June 9, the 3rd Battalion of the 22nd Infantry Regiment (without Company K) was attacked after a major artillery preparation by the 44th Field Artillery Battalion commanded by Lieutenant-Colonel William A. Watson (1 500 shells are drawn in total during this preparation). Company L carries out a wide bypass movement by the west, thus taking the German flank defenses. It is immediately followed by company I commanded by Captain Joseph T. Samuels and is articulated for the occasion in 5 groups of assault: the latter infiltrate through the networks of barbed wire and the minefields and reach the Casemates shortly after noon, wiping out small arms fire. The infantrymen are supported by tanks but are put out of use, touching mines during the approach phase: only one of them reaches the enemy position. The American soldiers quickly formed an assault group to destroy a first casemate with explosives and flamethrowers, but with no effect. They make a second attempt, then a third, with no result. Captain Samuels then sends Private Ralph G. Riley to attack the casemate as close as possible with his flamethrower: the latter runs the 70 meters of open under the enemy fire before reaching a bomb crater near his objective. But his flamethrower does not work: Riley then selects the “immediate trigger” mode of his portable weapon, opens the throttle valve and approaches a lighter from the end of the gun. Its flamethrower works and it approaches the armored door of the casemate; A few seconds later, while shells from Crisbecq’s battery fell on Azeville’s battery, several detonations resounded inside the bunker: German ammunition exploded.

A white flag was hoisted, and the 169-strong Azeville garrison surrendered behind an American paratrooper who was hitherto a prisoner of the Germans. In the wake, the 22nd Infantry Regiment is deployed to the north. It progresses about one kilometer before being stopped by an isolated resistance at the height of the castle of Fontenay. 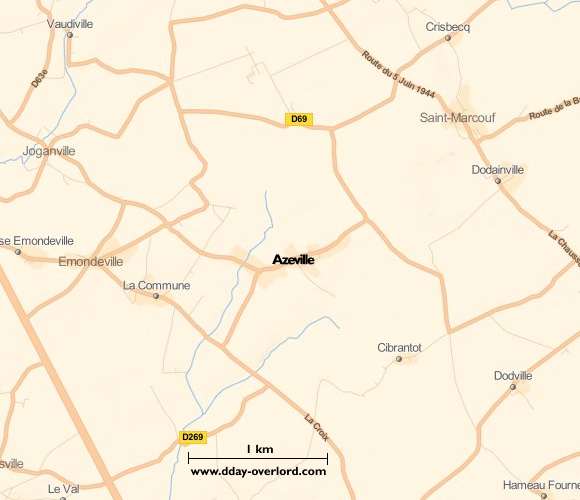