Liberation of Barneville-Carteret in 1944 during the Battle of Normandy

Before their unification in 1965, Barneville-sur-Mer and Carteret are two distinct communes.

On June 17, 1944, the Americans wanted to reach the western coasts of Cotentin and they went to the municipalities of Barneville-sur-Mer and Carteret. The 3rd Battalion of the 60th Infantry Regiment (9th Infantry Division) is to seize Barneville-sur-Mer. In the evening, the battalion was only six kilometers from its target, and Major General Manton S. Eddy, commander of the 9th Infantry Division, ordered further progress to the coastal road at 10.10 pm 650). The American convoy sets off: it is led by company K of the 3rd battalion installed on 5 Sherman tanks of the B squadron of the 746th Tank Battalion, 4 M10 Destroyer tanks of the 899th Tank Destroyer Battalion squadron and 4 semi -millaged M3 from the anti-tank section. Despite the loss of an armored car at the start of the journey, the Americans reached the heights of Barneville at 5 am.

Supported by the rest of the battalion installed on the land movement dominating the coast, the company K and armored vehicles began the reconnaissance of the commune of Barneville-sur-Mer which seems deserted by the opponent. Some German soldiers of the military police are taken prisoner and the village is quickly under control. During the early hours of the morning, several contacts with the adversary were established: these were isolated units that did not expect to find the Americans already in the area. At 10 am, the company L installed on the southeastern cover of Barneville must repel at least 125 German soldiers who try to cross the device. The Germans do not get there and 85 of them are taken prisoners. Later, a new attack began, this time from the north, led by elements of the 77. Infantry Division on positions defended by the 1st Battalion of the 60th Infantry Regiment. The intervention of the cannons of the 60th Field Artillery Battalion put an end to this desperate attack.

The Americans thus isolated the German forces north of Cotentin (nearly 40,000 soldiers) from the rest of their forces: they can no longer be strengthened or refueled. 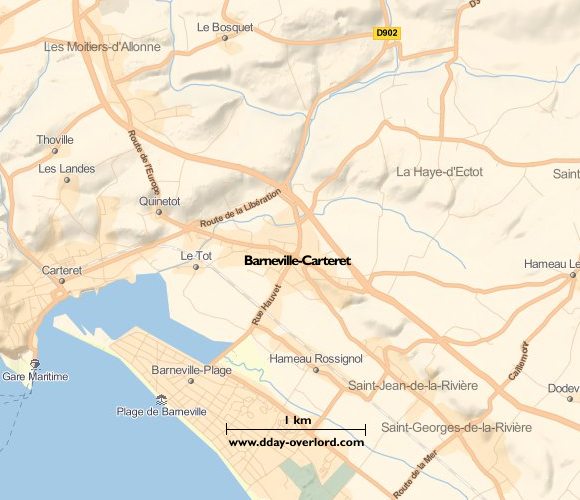