When the Allies set foot in Normandy, the commune of Bayeux must be under control on the evening of June 6, in order to secure the national road 13 that connects Caen with Cherbourg. But the difficulties encountered during the landing phase lead to multiple delays in the initial schedules; The 56th Independent Brigade, temporarily attached to the 50th Infantry Division, arrived at the northern edge of Bayeux at the end of the day on D-Day. The 2nd Battalion Gloucestershire Regiment set up an interdiction in front of the city and sent patrols that inform about the adverse device: the latter manage to infiltrate in the north-east of Bayeux and then join their lines.

The next morning the English soldiers of the regiment entered the city, which had been deserted by the Germans; The latter retreated to a new line of defense further south. The inhabitants, in jubilation, welcome their liberators. Bayeux is the first city of this size to pass under allied control during the Battle of Normandy, intact moreover. Less than 8 days later, on 14 June 1944, the city was visited by General de Gaulle during a tour of various communes. Guillaume Mercader, head of the Resistance of Bessin, had the population gathered and raised a platform on the castle square. When the general arrives around 3:30 pm in his Jeep led by Major Sanderson, François Coulet and the town council of the town welcome him and lead him on foot to the sub-prefecture. The population finally puts a face on the voice that it has heard for several months. After a brief interview with the Prefect Rochat, Maurice Schumann announced the General by the formula “Honneur et Patrie, here is General de Gaulle” and de Gaulle addressed the Bayeusains.

General de Gaulle’s speech on June 14, 1944 in Bayeux: “We are all moved to find ourselves together in one of the first liberated cities of metropolitan France, but this is not the time to talk about emotion. That the country expects from you, behind the front, is that you continue the fighting today, as you have never stopped since the beginning of this war and since June 1940. Our cry now, as Always, is a battle cry, because the path of battle is also the path of freedom and the path of honor, it is the voice of the motherland, and we will continue to wage war with our forces , Sea and air as we do today in Italy, where our soldiers have covered themselves with glory, as they will do tomorrow in metropolitan France. Our empire, fully assembled around us, provides enormous help. We will fight for France with passion, but also with reason. Have been under the enemy’s boot and have been part of the Resistance groups, you know what this war is. It is a particularly harsh war, this clandestine war, this war without arms. I promise you that we will continue the war until the sovereignty of every inch of French territory is restored. No one will stop us from doing it. We will fight alongside the Allies, with the Allies, as an ally. And the victory that we shall win will be the victory of liberty and the victory of France. I will ask you to sing with me our national anthem, the Marseillaise.“(General de Gaulle gives another speech in Bayeux, known as the “Bayeux speech”, June 16, 1946).

Less than two weeks after D-Day, the British set up a field hospital on the outskirts of Bayeux: the No 79 General Hospital, which welcomes Allied and German wounded. A military cemetery is also located in the southwest of the commune, containing the remains of 3,935 British soldiers, 466 Germans, 181 Canadians, 25 Poles, 17 Australians, 8 New Zealanders, 7 Russians, 3 French, 2 Italians 2 Czechoslovakians and 1 South African. The cemetery also consists of a memorial erected in memory of the 2,092 Commonwealth soldiers missing during the Battle of Normandy. 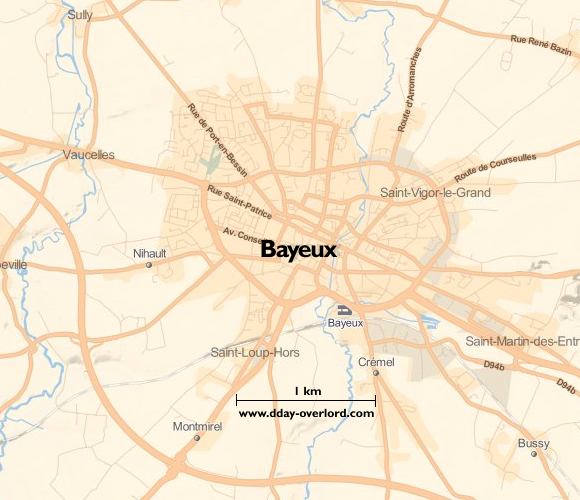