The village of Bény-sur-Mer is defended by soldiers of the 5th company (commanded by Hauptmann Rudolf Gruter) of Grenadier-Regiment 736, (716. Infanterie-Division). Before the landing, Bény was occupied by the command post of the 7th battery (commanded by the Hauptmann Wilhelm Franke) of the Artillery-Regiment 1716, equipped with 4 guns of 100 mm leFH 14/19 (t).

After hard fighting in Bernières-sur-Mer, the Canadian regiment of La Chaudière, progresses towards the south and reaches the outskirts of Bény-sur-Mer. The foot soldiers are supported by the tanks of the Fort Garry Horse and seize the locality in the early afternoon.

Beginning on June 10, 1944, the Royal Engineers 25th Airfield Construction Group began the construction of an airfield north-east of Bény-sur-Mer which is intended for the Royal Air Force and coded ALG B-4. This aerodrome remained operational until September 4, 1944. 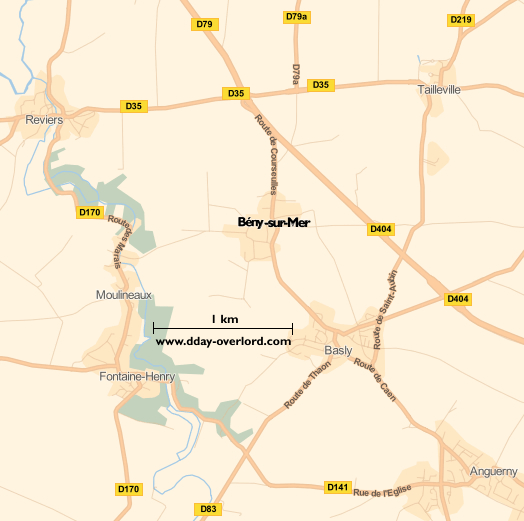