Beuzeville-au-Plain in 1944 – Manche – Battle of Normandy

In the spring of 1944, the village of Beuzeville-au-Plain was occupied by the 1st Battalion of Grenadier-Regiment 919 (709 Infantry Division) commanded by Hauptmann Fink, who installed his command post there. The municipality is located northwest of the coded “A” jump zone designated by the Americans for the release of the 502nd Parachute Infantry Regiment (101st Airborne Division) commanded by Colonel George Moseley. This regiment, through the 1st Battalion under the command of Lieutenant-Colonel Patrick F. Cassidy, is responsible for securing the most northerly causeways connecting the Utah beach and the inland through wide flooded marshes.

In the early hours of June 6, 1944, parachutes on Normandy began. A Douglas C-47 transport aircraft belonging to the 439th Troop Carrier Group and carrying the company officer of the 506th PIR Easy Company, 101st Airborne, is hit by the German anti-aircraft defense and is trying to land. It crashed at 1:12 hitting a hedge, killing all crew members and parachutists on board. Read here to learn more about this crash.

The first battalion of the 502nd Parachute Infantry Regiment (PIR) is not being dropped at the planned location, but US paratroopers are moving towards their targets without delay. In order to cover roadside actions, a detachment of 45 A soldiers led by Lieutenant Wallace A. Swanson is sent east of Beuzeville-au-Plain to block Departmental Road 17. Meanwhile, The Germans deployed numerous reinforcements from the north of Cotentin, in particular the Sturm-Battalion AOK 7 and the Panzerjäger-Abteilung 709.

Shortly after noon, four vehicles were detected between Beuzeville-au-Plain and Foucarville: they were stopped and destroyed by the action of Lieutenant Swanson. Lieutenant-Colonel Cassidy ordered Captain Fred A. Hancock’s company C to seize Beuzeville-au-Plain, finding that the Germans were increasingly seeking to infiltrate the allied bridgehead. These elements begin their progression at nightfall and are taken to part at the height of the hamlet Fournel that the leading elements have confused with Beuzeville-au-Plain. The paratroopers retire to the south, facing the Fournel. They were reinforced at the same time by infantrymen of the 12th Infantry Regiment of the 4th Infantry Division who settled during the night in prohibition facing the north.

The next day, June 7, 1944, the 1st Battalion of the 12th Infantry Regiment launched its offensive towards the north and seized Beuzeville-au-Plain before continuing its progression for nearly two kilometers. 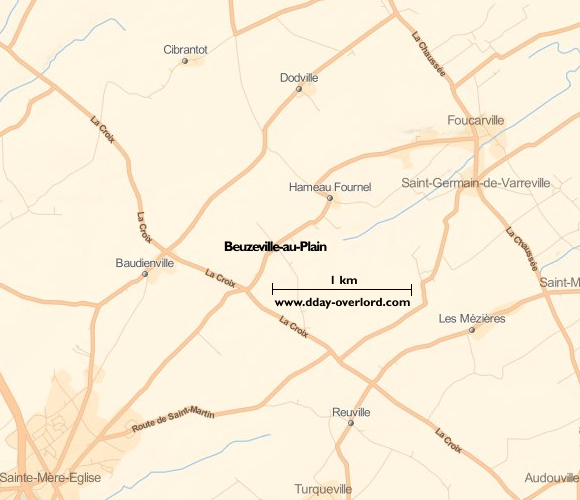