The commune of Bras is defended by elements of the third battalion of the SS Panzer-Grenadier-Regiment 1 of the 1. SS Panzer-Division “Leibstandarte Adolf Hitler”. In accordance with the plan of Operation Goodwood, launched on July 18, 1944, it is the 11th British Armored Division which is responsible for seizing it. The village is located on a very open ground, favorable to armored actions, which opens the way to the crest of Verrieres, a plateau dominating the Caen-Falaise road.

The assault was preceded by one of the largest air bombardments of the entire Second World War in Europe. This prelude to the land attack forces the Germans to reorganize as best they can, while at the dawn of 18 July the British launched their offensive. Elements of the SS Sturmgeschütz-Abteilung 1 (1. SS Panzer-Division) arrive in reinforce at Bras towards noon, defending the accesses to the crest of Verrieres. The 3rd Royal Tank Regiment (29th Armored Brigade, 11th Armored Division) is advancing towards Bras and is ruthlessly caught by the enemy, suffering very heavy losses in record time. On this first day of the Goodwood offensive, the English proved incapable of reaching this fortified village.

On July 19, 1944, at dawn, the attack resumed. The village of Bras appears as a fortified point that can not be removed by a frontal attack, the English initiate a maneuver of overflowing as well by the east (with the 3rd RTR progressing towards Hubert-Folie) and by the west . To the west, the units are not able to advance so much losses are high. To the east, the 3rd RTR takes the Ifs road from the south to the north and enters the defense of Bras, supported during this maneuver by the 8th Battalion The Rifle Brigade (29th Armored Brigade). The British lose nine tanks during the attack but managed to repel the Germans from the 1. SS Panzer-Division, who retreated outside the village, forming a new line of defense two kilometers further south. 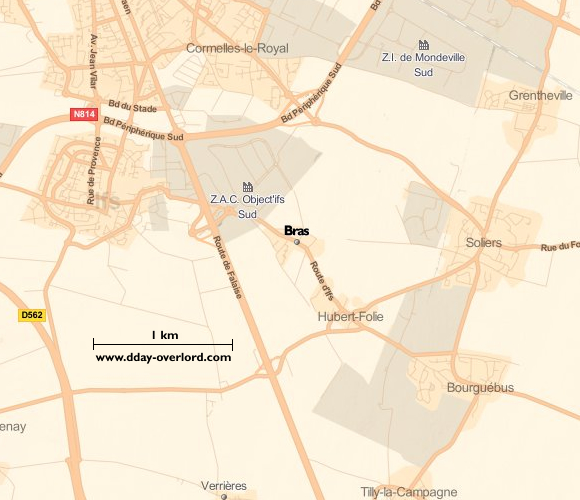