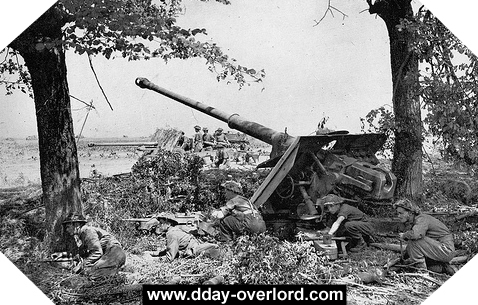 British gunners in Cagny in July 1944

The largest gathering of armored vehicles

Mid-July 1944, the city of Caen still did not fall into the hands of the Allies when it was to be released on the evening of D-Day. The Germans massive reinforcements in this region, including armored units , Which is not without worrying the British. They wanted to set up an offensive to break through the German lines and clear their blocked bridgeheads since 6 June 1944. At the same time, the Americans were preparing the Cobra operation south of the Cotentin Peninsula, scheduled for July 20 1944: the Goodwood offensive could attract German reinforcements in the area of ​​Caen and leave the field relatively free to the American forces.

This ambitious operation, finalized on July 13, 1944 by General Dempsey and approved by General Montgomery, aims to bypass Caen by the east to reach the southern region composed of vast cereal plains, a terrain favorable to armored operations, to cut The German refueling routes. To this end, Commonwealth forces gather an impressive number of armored vehicles: nearly 1,300 tanks, belonging to the three armored divisions of General Dempsey’s second army, the largest armored group in the entire battle of Normandy of the Western European campaign.

The assault, whose objectives are the bridge and the heights of Bourguébus, is planned for July 18, 1944 and is led by the 8th corps of the second British army. Canadian forces cover the right flank (their action corresponds to the plans of operation Atlantic, integrated into operation Goodwood) while the 3rd British Infantry Division is located east of the 8th Corps. At the start of the advance, armored vehicles must cross the bridges over the Orne river and engage the battle, which immediately makes the allied tactical situation problematic. The objectives of the 11th Armored Division are Bras, Hubert-Folie, Verrières and Fontenay. The 7th Armored Division must reach Garcelles-Secqueville while the Guards must attack between Cagny and Vimont.

Meanwhile, German intelligence services warn units in the Caen area that a British attack is being prepared, which should bypass the city from the east and head towards Paris. The two armored divisions of the area, the 12th Panzer Division and the 21st Panzer Division, prepare for the possibility of an attack and watch for any signs indicating the adverse preparations.

The ground attack is preceded by a massive aerial bombardment: more than 7,800 tons of bombs are dropped by 2,077 allied aircraft. This “carpet bombing” tactic aims to dislodge the Germans from their powerful defensive positions and disorganize them. Moreover, the impact of such a bombardment is positive on the troops preparing for the assault. Naval artillery and land artillery take over from aviation and fire close to 250,000 shells, targeted in a vast area between the eastern part of Caen and the village of Troarn, a corridor about fifteen Kilometers and four kilometers wide. The distribution of the bombardment areas is as follows: the eastern shore of Caen is coded “A”, the Cuverville – Giberville – Démouville – Mandeville perimeter is divided into five parts coded successively from “C” to “G” , The area between Sannerville and Emiéville is coded “H”, the surroundings of Cagny are coded “M” and the perimeter Bourguébus – Hubert-Folie – Grentheville is coded “P”.

Allied troops immediately set out: in reaction, the Germans set up a dense counter-barrage of artillery while the British tanks are slowed down by the three bottlenecks located at the level of the three bridges on the Orne river. In addition to this initial difficulty, there is also the significant presence of mines in the area, posed by both the Germans and the Allies: in the haste of these installations, few surveys were established by the British, which slowed down Strongly the progression of the 11th Armored Division. As for the Germans, they firmly hold the area according to their orders, and every village, farm or hamlet is forbidden.

The fighting southwest of Caen in the vicinity of Louvigny is fierce between the Canadians and the 12th and 21st SS Panzer divisions attached to the Western Panzergruppe commanded by Eberbach. This small village, lost the day before by the Allies, was taken again on 18 July in a vast attack carried out by the Royal Regiment of Canada, supported by field and naval artillery.

The 2nd Northamptonshire Yeomanry, supported by the tanks of the 29th brigade belonging to the 11th British Armored Division, advance in turn towards the villages of Cuverville, Giberville and Demouville, severely bombed on the morning of July 18 and defended by the 16th Luftwaffe Feld Division, which retreated shortly after the bombing, abandoning the village of Cuverville to the Allied troops and positioning itself to the southwest of the locality of Saint-Pair. The 3rd Royal Tank Regiment frees the villages of Touffréville and Sannerville, located south of the locality of Hérouvillette-Escoville, itself liberated in the early hours of operation Goodwood. The first line of German defense is depressed, and the British advance for nearly six kilometers in the direction of Cagny.

Major von Luck, commander of the 21st Panzer Division, is aware of the weak resistance of the British tanks to the German guns of 88 mm and the tanks Tigre and Panther. It then regroups five of its artillery pieces and a Tigre tank on the height of the village of Cagny, which becomes a stronghold of the German resistance southwest of Caen: nearly 16 English tanks are destroyed in a few minutes and the Progression is greatly slowed.

But the British did not give up the game, the armored division of the Irish Guard attacked Cagny head-on while the 5th brigade of the Guards armored division was heading towards the villages east of Cagny towards Emiéville and Guillerville. It is one of the most important armored fighting in the entire Battle of Normandy. Once again, the German Tiger tanks of the 503 Armored Battalion show their superiority and repel the British attack. The Irish Guards still managed to break through the German defenses because of their numerical superiority and the bombardment of the British artillery, and they liberated the village of Cagny, after having silenced the artillery positions there Were installed and defended by the men of the 21st SS Panzer division.

At the end of the day, the British lost 1,500 soldiers 270 tanks and they only increased by 7 kilometers. The whole plain to the south-east of Caen is finally liberated. The city of Caen itself is fully liberated, more than a month after the scheduled date.

The main German resistance point of 18 July, located at Cagny, has fallen and now the Germans are striving in the vicinity of the villages of Guillerville (now Banneville-la-Campagne) and Emiéville, Southeast of Caen, defended by the 21st SS Panzer division and the survivors of the 16th Luftwaffe Felddivision.

The Canadians of the 2nd Infantry Division, south of Caen, are fighting the survivors of the 272nd German infantry division, largely decimated during the previous day’s shock, which still resist south of the village of Saint-Martin-de-Fontenay. The 11th British Armored Division is progressing along the Caen-Falaise road and is fighting the troops of the 1st SS Panzer division. The strategic position of Bourguébus is finally reached by the 7th British Armored Division after violent bombing. Anglo-Canadians once again lose a hundred tanks in a single day, notably because of the superiority of the German Tigre tank on the ground.

The return of rain

The British pushed back several German attacks from the 21st Panzer Division to the north and east of the villages of Emiéville and Guillerville. The weather is increasingly bad in Normandy: rainstorms are emerging and the Allied forces no longer advance in the southern plain of Caen.

Operation Goodwood abruptly stopped and the German defenders, if they were disoriented on July 18 during the bombing and the beginning of the Anglo-Canadian offensive, are now well prepared not to let go of an inch to the Allies. They inflict a loss of more than 100 tanks to the British on 20 July which already lost in three days nearly 400 armored vehicles.

Conclusion and controversies of Goodwood

Operation Goodwood ended in southwestern Caen and the British advanced only 11 kilometers while several thousand tons of bombs were sent to German positions.

3,600 men and 469 Allied tanks were put out of action and the town of Falaise, which was one of the objectives of the Goodwood offensive, is far from being reached. However, despite reports of little encouragement, General Montgomery expressed his satisfaction. The Germans sent numerous tanks to the south-east of Caen, thus allowing the American forces, in the west, to pierce towards the south in the days that follow.

There was some controversy about operation Goodwood: was it simply to prevent German tanks from counterattacking after the Cobra offensive, or was it a matter of definitively breaking through the blockade of the Caen to put an end to the campaign of Normandy? This hypothesis is admissible in so far as the means employed have deceived the German intelligence services, which saw in this offensive an attempt to break through to Paris. In any case, the fact that the means of their opponents have focused on Caen is a tactical victory for the Allies.

Many unconfessed reasons may have motivated this offensive, costly in human lives and material. One of them is the need for Montgomery to respond to the criticisms of the American airmen concerning the British progression in Normandy. The latter, considered too slow, did not allow the construction of new aerodromes for the Allied pilots and it became urgent to drill towards the south to increase their number, especially in the region of the plain of Caen, very favorable to their installation.

But it is clear that if the British and the Canadians had been able to put an end to the Battle of Normandy during operation Goodwood, they would not have been deprived. For this is indeed the aim of most offensives during a war (apart from the operations of deception): to succeed in definitively overthrowing the situation in its favor. Goodwood was not the decisive element, despite very heavy losses.