Bricquebec in 1944 – Manche – Battle of Normandy

In spring 1944, the municipality of Bricquebec houses the command post of the Artillerieregiment z.b.V. 621 (91. Infantry Division) led by the Oberstleutnant Hermann Seidel. The Germans select the sector of Bricquebec to accommodate a surface storage center of hydrogen peroxide, baptized “n°1009 Büffel” which was used for the propulsion of the launching cart of the V1 rockets. Several cylindrical aluminum alloy tanks were installed at a place called “Les Chasses Crochues”, camouflaged along a hedge. The rockets were then to be fired from a site still under construction, in the vicinity of Bricquebec.

On May 8, 1944, as part of Operation Crossbow to destroy the V1 and V2 rocket launch pads in Europe, the Allies renewed an air raid on the V2 rocket construction site at Sottevast. One of the Boeing B-17 Flying Fortress belonging to the 384th Bomber Group was hit by the German air defense at 5 p.m. Its pilots, lieutenants James E. Foster and Clifford L. Johnson, failed to straighten the bomber, which caught fire and went into a spin towards the ground. It crashed at 5:02 p.m. at a place called Le Foyer. The eleven crew members of the aircraft numbered 42-31495 and nicknamed “Wabbit Twacks” were killed: they were buried in Cherbourg on May 12.

On 19 June 1944, after the liberation of Barneville-sur-Mer, which enabled the isolation of nearly 40,000 German soldiers north of Cotentin, the Americans launched a new offensive towards the north and the 39th Infantry Regiment 9th Infantry Division) commanded by Colonel Harry A. Flint who was in charge of seizing Bricquebec. At 5.50 am, the 2nd battalion of the 39th Infantry Regiment under the orders of Major Franck L. Gunn began the progression without any problems. The commune was attacked at seven o’clock and the Americans seized it quickly: the Germans fled further north, abandoning Bricquebec without resistance to their adversary.

On July 6, 1944, the Americans inspected the storage site for hydrogen peroxide tanks and the site of the nearby V1 rocket launch site. 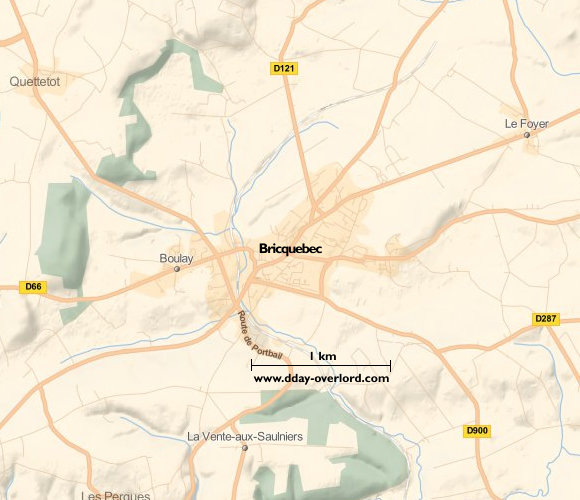