Bures-sur-Dives in 1944 – Calvados – Battle of Normandy

The commune of Bures-sur-Dives in Calvados is located to the south-west of the marshes of the Dives. The Germans who occupy the area belong to the 4th company of the Ost Battalion 642 integrated in the 4th Battalion of the Grenadier-Regiment 736 of the 716. Infantry Division.

The Allies wanted to secure the left flank of their bridgehead by destroying several bridges over the Dives and Divette rivers and then retreating to the compulsory crossing points by firmly holding them against any German counter-attacks. The 3rd Para Brigade of the 6th Airborne Division was in charge of this mission in the early hours of 6 June 1944, and the 3rd Parachute Squadron Royal Engineers were ordered to destroy two bridges in Bures-sur-Dives.

The English sappers are dropped from 00h57 above the zone of jump coded “K” by the Allies and which is north of Sannerville. The drops are very bad because one third of the sticks are parachuted over another zone of jump, the drop zone “N” located near Ranville. Despite these difficulties, the paratroopers move towards their objectives and Captain T. R. Juckes, at the head of the No. 2 Troop of the 3rd Parachute Squadron Royal Engineers, reaches the road bridge he destroys. A few hours later, at 9:15, his men destroyed the railway bridge. His mission filled, Captain Juckes and his sappers folded towards the wood of Bavent.

In the weeks that followed, the front did not evolve and it was not until the launch of Operation Paddle in August 1944 that the situation changed. This offensive directed towards the Seine began on the night of August 16 to 17 and the 8th Battalion Parachute Regiment (3rd Para Brigade) commanded by Colonel Alistair S. Pearson captured Bures-sur-Dives on 18 August 1944. The sappers of the 3rd Parachute Squadron are therefore endeavoring to allow the crossing of the Dives. 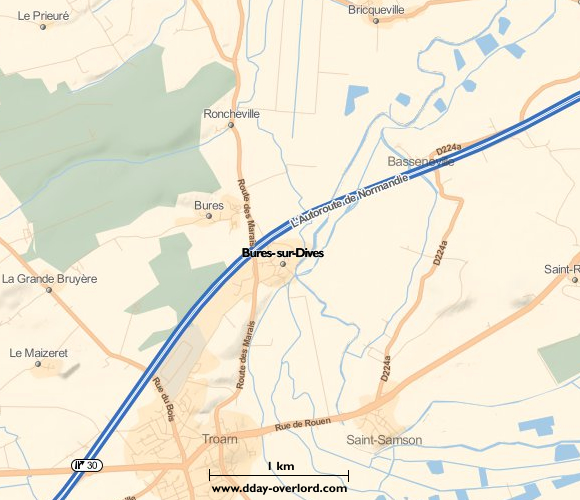