Cabourg in 1944 – Calvados – Battle of Normandy

On D-Day, the commune of Cabourg is occupied by the Grenadier-Regiment 744 belonging to the 711. Infanterie-Division.

On 17 August 1944, more than two months after D-Day, the British launched Operation Paddle in the direction of the Seine.

As early as 18 August 1944, the British 1st Battalion Royal Ulster Rifles (6th Airborne Brigade, 6th Airborne Division) entered the suburbs of Cabourg but were slowed down by numerous traps installed by the Germans along the Dives valley since the First week of the Battle of Normandy. Hundreds of mines were laid and seriously damaged the ranks of English soldiers.

The offensive reconnaissance of August 18th is a failure and the compartmentalized nature of the terrain between the Channel coast to the north and the multiple rivers to the south does not allow for large bypass maneuvers.

The following day, 19 August 1944, the 6th British Airborne Division ordered the launch of several lightweight reconnaissances which were responsible for defining the German defensive system in order to prepare for the offensive. Meanwhile, Belgian and Luxembourg soldiers of the “Piron Brigade” (1st Belgian Independent Group) attached to the 6th Airborne Division landed the Royal Ulster Rifles in position and began their installation until 20 August in the night. Detecting the activity of their opponents, the Grenadier-Regiment 744 (711. Infantry-Division) Germans make the decision to retreat in favor of the night. But before abandoning Cabourg, they sabotaged the bridge over the Dives, the key point of the commune.

On the 21st of August the Belgians set out for the assault on Cabourg. The German rear-guard left several of its elements to delay the allied advance, inflicting losses in the allied ranges. In the course of the day, the Piron brigade sappers set about installing makeshift means (replaced the same day by a Bailey bridge) on the Dives in order to cross the first Belgian motorized company heading for Houlgate. 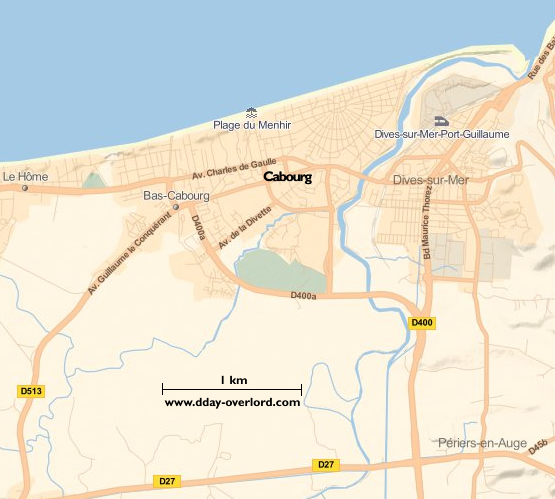