The initial plan of the Allies foresees the liberation of the city of Caen on the evening of Tuesday June 6, 1944 by the British troops of the 3rd division of infantry.

Thus, many infantrymen are equipped with foldable bicycles when landing in order to move more quickly. But during the onslaught of the beaches, the units fall behind schedule. After the disembarkation phase and many tanks are isolated, a few kilometers from Caen only, without the support of the infantry. Not wanting to risk the unnecessary loss of armored vehicles, the British General Staff retreated the most advanced elements. The release of Caen is then postponed and the allied generals believe that it is only a matter of hours.

At D-Day + 1 (June 7), General Montgomery, commander of the Allied land forces in Normandy, launched Operation Perch, which aims to relaunch the offensive of the previous day in order to finally seize Caen. But the Germans defended themselves relentlessly and prevented the British from advancing. The first assaults were stopped by the German soldiers and tanks of the 12th Panzer Division defending Caen and especially the attack carried out by the 185th brigade of the 3rd British infantry division in Lebisey, bordering the capital. Indeed, the German defense is ready to defend its positions. The commander of the 21. Panzer Division, Edgar Feuchtinger, has 16,000 men, 146 tanks, 4 battalions of motorized infantry, about 50 guns and a battalion of Flak guns with 24 88-caliber pieces buried north of Caen. General Montgomery ordered the 7th Armored Division (the famous “Desert Rats”) and the 51st Highland Infantry Division, each belonging to the 8th British Corps, to begin the assault. After a beginning of encirclement north of Caen, the advance of the Allies in this sector must stop: on D-Day + 5 (June 11), the losses of men and material are disastrous: the 12th battalion of paratroopers British (6th Airborne Division), loses 141 of the 160 paras engaged during the capture of Breville.

The seizure of Caen taking a serious delay from the date originally planned, especially since Montgomery decides to wait for the reinforcement of sufficient units before relaunching the offensive: thus, it plans to use on D-Day + 17 (June 23) the forces commanded by General Richard O’Connor, namely the 1st, 8th and 30th Corps (60,000 men, 600 tanks and 700 guns). This new operation is called “Epsom“. But on 23 June a new storm raged in the English Channel, and reinforcements of foodstuffs, materials and fuel were blocked aboard the ships or in England, which could no longer be carried by the sea for some time because of the bad weather. And if the Allies suffer from not being able to advance, the Germans, they, take advantage of this acalmia to reinforce their front line by a new armored division, Panzer Lehr. In total, the German force in the sector of Caen represents 228 tanks, 150 guns of 88 mm as well as multiple canons divers.

Sunday, June 25, 1944 marks the beginning of the ground offensive of Operation Epsom: 60,000 men and 600 tanks belonging to the 2nd British Army attack west of Caen. Two days later, the Scots broke through the German front about 10 kilometers deep, an impressive performance that did not meet the hopes of Montgomery who, from his headquarters in Blay, was worried by the catastrophic reports of British losses since the start of Epsom.

On 1 July, when Operation Epsom was stopped by order of the command, Caen still did not fall. This offensive attracted many German armored vehicles (belonging to the 2nd SS Panzerkorps (9th and 10th SS Panzerdivisions) of Poland and the 1st SS Panzer Division from Belgium) around the city, which were not able to break through between Bayeux And Arromanches, as Hitler wished. The latter refused to abandon the capital of Calvados and replaces most of his generals at the head of units defending the surrounding area Caen: von Kluge will replace von Rundstedt, sacked after proposing to make peace with the Allies. Rommel still remains at the head of Army Group B but Eberbach replaces Geyr von Schweppenburg wounded.

The city of Caen is encircled to the north (and in particular by the British paratroopers of the 6th airborne division in position since D-Day) and to the west by the positions held by the Anglo-Canadians on the Odon. The situation became extremely tragic for German defenders who had to withstand a bombardment on 7 July in the evening by the strategic forces of General Harris’ Lancaster and Halifax aircraft. 2 500 tonnes of bombs are dropped north of Caen, on the outskirts. The 3rd Canadian Division and the 3rd British Division occupied the northern part of Caen on D-Day + 33 (9 July 1944), while the 12th SS Panzer Division and the 272nd Division fell towards the south of the Orne river.

The British General Staff believes that a new large-scale offensive will allow its troops to control the whole city and to drive the Germans out of Caen and the roads of the South. He set up operation code-name Goodwood, which begins on July 18: 750 tanks must pierce from the east towards Bourguébus. At the same time, a diversion attack must attract enemy defenders to the west of the city two hours before Goodwood starts. Previously, 4,500 allied bombers have to destroy all targets on the British routes: they drop 7,000 tons of bombs and are backed up by naval artillery and ground artillery, which fire close to 250,000 shells. But the German Tiger and Panther tanks blocked the road, helped by the formidable 88 mm guns. Very quickly, with all the bombardments preceding Goodwood, the German officers ordered that the tanks be buried, leaving only the turret: the 36 tanks Tiger become more dangerous than ever. On the evening of 18 July, 6,000 soldiers were victims of the fighting and nearly 400 tanks were destroyed for an allied advance not exceeding 11 kilometers, Bourguébus still not under British control. The 11th British division loses 126 tanks in this one day.

Very criticized by the Allied General Staff, Montgomery defends himself by stating that the offensive of Goodwood is not a defeat: three major obstacles are crossed: Orne, Odon and Caen. Moreover, the British troops have the merit of having attracted most of the German armored divisions around Caen, liberating a little more the access towards the south of the Cotentin for the American troops. The city of Caen was completely liberated on July 20, at the end of operations Goodwood and Atlantic (the latter was entrusted to the 2nd Canadian Corps as part of Operation Goodwood), and the Caen plain controlled up to 7 kilometers from the city. But the city is almost entirely destroyed by the incessant bombardment of Allied land, sea and air forces. 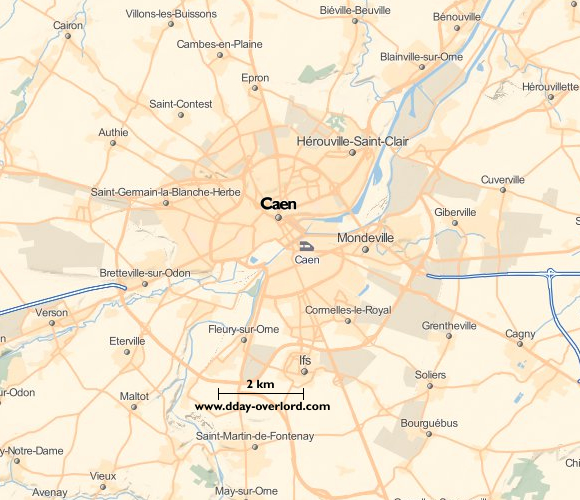