The commune of Ouistreham-Riva-Bella in Calvados was occupied in 1944 by the 1st Battalion of the Grenadier-Regiment 736 (716. Infanterie-Division) whose command post is located in a bunkers set codenamed Wn 14 (nicknamed “Sole” position by the British). The immediate proximity of the mouth of the Orne river explains the construction by the Germans of several pins of important supports.

The beach and the mouth of the Orne are defended by the encoded fulcrum Wn 08 (also coded Stp 08) comprising an imposing observation post and direction of the shots up to seventeen meters in favor of the 1st Battery of the 1260th German Coastal Artillery Regiment. This fire control station has five floors (including an underground), a powerful telemeter, several watch-rooms, transmissions, ammunition and troops. Several dwellings were destroyed in order to install incubators that received 155 mm guns of French origin (1917 GPFs) with a range of 19 kilometers. The Stp 08 is supported by a fulcrum built in 1943 on the beach at the site of the former Riva-Bella casino, which is coded Wn 10 by the Germans.

Access to the southern part of the town is defended by an important German base coded Wn 12 (nicknamed “battery Daimler” by the British) located near the water tower. Originally a horsepower battery position, the Wn 12 is finally equipped with four bunkers with adjoining bunkers and is armed by the 4th battery of the Artillery-Regiment 1716 (716. Infanterie-Regiment) and comprises four 155 mm guns sFH 414 (F).

Given the size of the locality, the Allies do not plan to land in front of the municipality, but they want to take a first step 1,500 meters further west to La Brèche d’Hermanville (where density of dwellings is reduced) then in a second time seize Ouistreham and its various points of support by a rotating movement. French-British commandos of the 1st Special Service Brigade who are responsible for carrying out this maneuver on D-Day.

On June 6, 1944 at 8 o’clock Commando (1st Special Service Brigade), commanded by Lt. Col. RWP Dawson and transported on board 13 LCA and 2 LCI (LCI 523 and LCI 527) landed on Queen Red Sector Of Sword Beach facing La Breche. Dawson is injured twice (in the leg and head) and must temporarily leave his hand to Major Ronald Menday. The first two units, Troop 1 and Troop 8, are composed of French commandos led by Captain Frigate Kieffer. The soldiers of “Commando Kieffer” are sent in the front line to capture Ouistreham, supported by tanks 5th Royal Marine Independent Armoured Support Battery and supported by the other elements of No. 4 Commando. The French attack first Wn 10 (at the site of the old casino): Troop 8 is installed in support and Troop 1 goes up to the assault, but the Germans resist. Kieffer, wounded, manages to obtain the support of an English Sherman Duplex Drive tank belonging to Troop 1, B Squadron, 13th/18th Royal Hussars, whose tank commander is Lieutenant Dionysius Harold. The latter, by virtue of its decisive intervention, allows the commandos to silence several enemy positions. Kieffer Commando Captain Robert Lion was killed when a German sniper shot him in the heart during the assault as he tried to rescue Corporal Paul Rollin, who was seriously injured in the head. It was then the English commandos who mopped-up and cleaned the entire strongpoint while the French continued towards the east bank of the Orne.

The Englishmen of the 2nd Battalion East Yorkshire Regiment (8th Infantry Brigade), also disembarked at La Brèche, advance directly towards the points of support Wn 12 (Daimler position) and Wn 14 (Sole battery). They succeeded in accomplishing their mission, losing however 137 soldiers killed, wounded, disappeared or taken prisoner during this first day of combat. 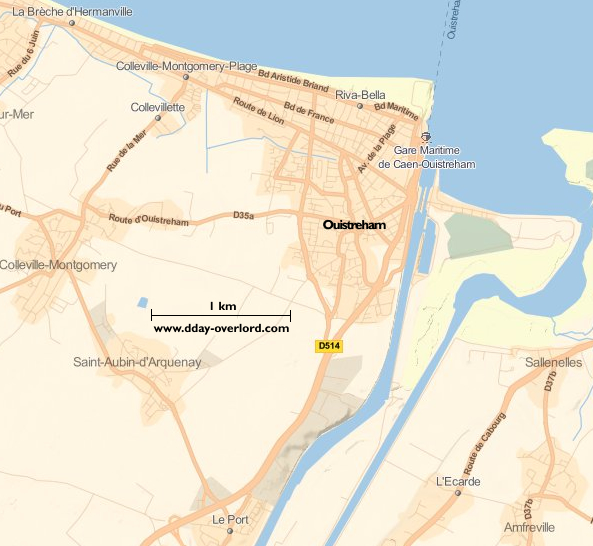