The hamlet of Caponnet is located less than one kilometer north-west of Chef-du-Pont on the west bank of the Merderet. Placed under the responsibility of Grenadier-Regiment 1058 (91. Infanterie Division) in the spring of 1944, this small village is on a high point that dominates the area (“hill 30”). On D-Day, the 2nd Battalion of the 508th Parachute Infantry Regiment (82nd Airborne Division) commanded by Lieutenant-Colonel Thomas J.B. Shanley must come together before starting his missions.

In the early hours of June 6, 1944, the C-47s at the head of the 508th PIR carried out a good approach to the launch zone but the rest of the pilots did not follow, mainly because of the German Flak fire disrupting the Flight training. The parachuting is carried out between 02:08 and 02:20 at a height that is far too high, at 700 meters of altitude (while that of the 101st Airborne Division is carried out at 150 meters). As a result of the difficulties encountered by the pilots, 33 of the 132 sticks of the 508th PIR land less than a kilometer away from the jump zone. Half of the regiment’s paratroopers (about 65 sticks) are not able to accomplish their mission either because they land more than 15 kilometers from the DZ or because they are completely isolated and lost in the night.

Lieutenant-Colonel Shanley was dropped east of Picauville and decided to head first to the rally point near the hamlet of Caponnet before attacking the bridges on the Douve at Beuzeville-la-Bastille and Pont-l’Abbé. Shortly before noon, he made radio contact with Lieutenant Norman McVicar, commanding company D of the 508th PIR, and managed to bring together some sixty parachutists and the two elements decided to join forces to join forces. The Germans multiply patrol and try to fix Shanley to prevent him from reorganizing. In the middle of the afternoon, a third group, led by the deputy commander of the 1st Battalion of the 508th PIR, Major Shields Warren, reinforced these elements with about 150 parachutists. These men set themselves up as defensive for the night in the area of ​​the hill 30 despite the incessant attacks of the opponent.

All the next day, the paratroopers commanded by Shanley were subjected to small arms and shells: the Germans continually harassed these men who held fast despite the deluge of fire and iron. The staff of the 82nd Airborne Division quickly realized that these elements, isolated on the west bank of the Merderet, had to be reinforced as soon as possible, or at least refueled, but the Germans prevented any maneuver in this sector composed of important discovered. Colonel Roy E. Lindquist, 508th PIR corps commander, wants to re-establish the link between his bridgehead at Chef-du-Pont and the isolated paratroopers at hill 30: about 50 soldiers reach the western shore of the Merderet but not deep enough to reach the men of Shanley: the terrain is also very compartmentalized by large swamps voluntarily flooded by the Germans, which is favorable to the defense. However, paratroopers manage to install a roadblock. But on June 8, 1944, when Lieutenant-Colonel Shanley’s men no longer had any food and were short of ammunition, the Germans counter-attacked, supported by particularly precise and deadly mortar fire, forcing the Americans to abandon Roadblock and to retreat on the east bank of the Merderet, at the height of Chef-du-Pont: Shanley is again in danger north, west and south of its position.

On the evening of June 8, Colonel Lindquist ordered Shanley to secure the causeway to the south of his position in order to circulate a supply convoy for his benefit: the need for ammunition, water, food and medical equipment ) Are very urgent. A patrol of 23 paratroopers led by Lieutenant Woodrow W. Millsaps (belonging to the Medical Detachment of the 508th PIR) was then deployed southward towards the bridges on the Merderet to secure the approaches to the causeway to the east bank. The patrol engaged several battles, supported and covered by parachutists, and managed to fulfill its mission: Lieutenant Millsaps reported his success to Colonel Lindquist. Unfortunately, the latter has decided in the meantime not to send the refueling convoy due to the presence of numerous enemies south of the Douve. Shanley had his blanket folded up along the roadway, believing he was not in sufficient numbers to hold out longer. The paratroopers are isolated for an extra night, while the Germans maintain their pressure and continue to harass their opponents.

On June 10, 1944, the 358th Infantry Regiment commanded by Colonel James V. Thompson and belonging to the 90th Infantry Division began the offensive directed towards Picauville from Chef-du-Pont starting at 4 o’clock in the morning. The fighting is particularly violent and the American infantrymen progress slowly. Nevertheless, supported by elements of the 508th PIR, the 1st battalion at the head of the device manages to shake the German lines in spite of the direct and indirect fire coming from the castle of Isle-Marie, to the south the causeway, Captured Caponnet that same day, forcing their opponents to retreat to Picauville and Pont-l’Abbé. 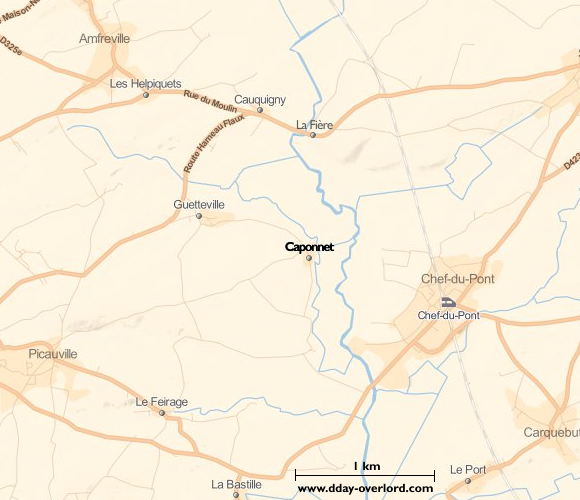